Find out here why the entire nation is busy #PrayingForNesamani! 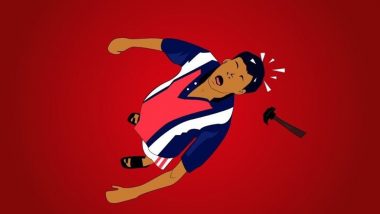 The nation cannot stop talking about Nesamani. Even now social media is flooded with the hashtag #PrayForNesamani. Nesamani is the character played by comedian Vadivelu in the 2001 film Friends. Before we explain the whole Nesamani saga, let us tell you, Vadivelu is absolutely fine. He is not hospitalised; the actor is hale and hearty. So why everyone is praying for Nesamani on social media? Why his pictures are been flooded on the internet? Why and how did this Nesamani memes begin? Nesamani Memes Take Over As the Internet Prays for Comedian Vadivelu’s Character from ‘Friends’.

Comedian Vadivelu is a popular actor in the Tamil film industry. His pictures or scenes from films are often used as memes. Since morning #Nesamani or #PrayForNesamani has been trending on top and it is clear, netizens are having a laughter riot. Be it celebs or politicians or sportsperson, all are tripping on this Nesamani meme. Is Sunny Leone's Career Change Plan the Reason Behind Viral 'JCB Ki Khudayi' Memes? Check Out This Tweet!

Vadivelu essayed the role of a contractor named Nesamani in the Tamil film Friends. There is a scene in the film in which a hammer accidentally happens to slip from one of the co-workers hand and falls on his head, causing injury. This is one of the iconic scenes that every south Indian movie buffs can’t get over. This meme started when a Pakistan-based meme page shared a picture of a hammer and asked, “What is the name of the tool in your country?”, reports News18.com. Guess a die-hard fan of Vadivelu could quickly relate to it and he gave ths Nesamani reference. And this led to confusion by another user, thinking that Vadivelu aka Nesamani is unwell. And then the meme started, #PrayForNesamani.

The actual scene from the film Friends

The hilarious part is comedian Vadivelu isn’t aware of this entire scenario that took the nation by storm. When TNM contacted the actor and asked about this meme, the Friends actor was quoted saying, “I have no idea what is happening. I haven't seen anything yet.” So are you guys still #PrayingForNesamani?

(The above story first appeared on LatestLY on May 30, 2019 04:57 PM IST. For more news and updates on politics, world, sports, entertainment and lifestyle, log on to our website latestly.com).