The War Is between Vijay and Ajith Fans! Twitterati Use Vadivelu’s Pics and Trend #VanduMuruganAJITH

Vandu Murugan is the character played by Vadivelu in the Tamil film Ellam Avan Seyal that released in 2008. He is the same actor for whom Twitterati were recently praying using the hashtag #PrayForNesamani. 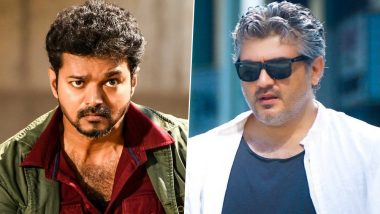 Thalapathy Vijay and Thala Ajith, have ardent fans across the globe. A single of them or a post on them can take the internet by storm. And when these fans decide to trend something about their favourite superstar, it would be at the top for sure and something similar has taken place already. So this time it is not about one superstar, but about two of them – Vijay and Ajith. Fans of Thala have decided to trend the megastar on top using the hashtag #VanduMuruganAJITH and guess what, pictures of Vadivelu is used for the same. #ThalapathyDayCommonCP: Why are All Vijay Fans Keeping a Common Cover Picture on Twitter?

Vandu Murugan is the character played by Vadivelu in the Tamil film Ellam Avan Seyal that released in 2008. He is the same actor for whom Twitterati were recently praying using the hashtag #PrayForNesamani, and those memes went on for days. So why Vijay and Ajith fans are at war? From the past few days we have been seen that fans were looking out for an update for Vijay’s 63rd film and they started to trend Thalapathy63UpdateDay and so on. Later when the update was out and on his birthday, many other hashtags were used to trend on top. Looks like that didn’t go down well with Ajith fans. Nesamani Memes Are Going Viral: EXPLAINED! Here’s Why #PrayForNesamani Posts Are Trending On Social Media.

Fans of Ajith have started to use #VanduMuruganAJITH and shared posters of his film Nerkonda Paarvai and are ensuring it becomes the top trend. But what caught our attention was the pictures of Vadivelu that were being used for the memes. Well, he is indeed become ‘the face’ for memes and one just cannot get over it. Not just that, Vijay fans are mocking at Ajith fans for using such memes to get him on top trend. Take a look at some of the posts shared by fans.

So what do you think of #VanduMuruganAJITH? Do you think Thalapathy Vijay’s fans will remain calm after this? Share your thoughts with us in the comment box below. Let's not forget, Vijay and Ajith share a great rapport off screen!

(The above story first appeared on LatestLY on Jun 23, 2019 05:23 PM IST. For more news and updates on politics, world, sports, entertainment and lifestyle, log on to our website latestly.com).