The legacy of Jayan's charisma is strong in Malayalam cinema, that at a time, there used to be plenty of Jayan dupes in the mimicry field. His inimitable dialogue delivery was a favourite among the mimicry artistes. 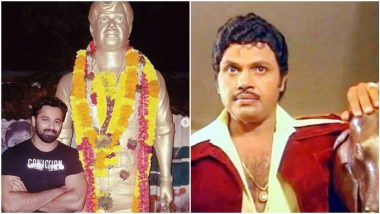 Even after 40 years of his unfortunate, tragic demise during the shoot of Kolilakkam, Jayan is still fondly remembered by Malayalam fans. Considered as the first alpha male hero of Mollywood, Jayan is known for his action roles in films like Angaadi, Meen, Karimpana, Moorkhan etc. He has done both positive and negative roles in his illustrious career, whose great life was cut short by a tragic helicopter accident while shooting for IV Sasi's Kolilakkam (a remake of Waqt) on November 16, 1980. In a career spanning merely eight years, Jayan had acted in about 124 films. Mamangam: Ranking All of Mammootty’s Period Films From Worst to Best; Where Does His Latest Movie Fit In?

On the actor's 40th death anniversary, actor Unni Mukundan paid a fitting tribute to the icon. Like Jayan, even Unni Mukundan is someone known for his fitness, in an industry that isn't too obsessed with six-pack heroes. So we aren't surprised when Unni called Jayan his favourite action superstar.

Posting a picture of him alongside a golden statue of Jayan, Unni wrote the reason why Jayan was his fave a

ction superstar, for he used to attempt risque action sequences at a time when safety harnesses were not a norm in the industry. Bruce Lee: Mohanlal Releases Motion Poster Of Unni Mukundan Starrer On Actor’s Birthday!

The legacy of Jayan's charisma is strong in Malayalam cinema, that at a time, there used to be plenty of Jayan dupes in the mimicry field. His inimitable dialogue delivery was a favourite among the mimicry artistes.

(The above story first appeared on LatestLY on Nov 16, 2020 06:14 PM IST. For more news and updates on politics, world, sports, entertainment and lifestyle, log on to our website latestly.com).