Ponmagal Vandhal is a Tamil courtroom drama directed by JJ Frederick and backed by superstar Suriya. Jyothika is the lead in the film, while the supporting cast involves R Parthiban, K Bhagyaraj, Thiagarajan, Pandiarajan, and Pratap Pothen. 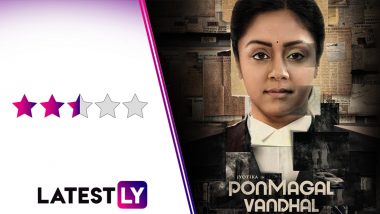 Ponmagal Vandhal Movie Review: 'Petition' Pethuraj (Bhagyaraj and his daughter Venba (Jyothika) are thorns for the small-time corrupt in their sleepy town. They file petition against anything unlawful and are considered quite a nuisance in the court premises. So it came as a surprise to many that Pethuraj's latest petition is reopening a 15-year-old serial murder case, where a woman called Jyothi is accused of killing five children and two young men trying to stop her. Jyothi was later killed in a police encounter. Ponmagal Vandhal: Jyothika's Courtroom Drama To Start Streaming On Amazon Prime From May 29 - Here's All You Need To Know About The Film's Cast, Plot And More!

What's even more shocking to the public, is that he gives the case to Venba to handle, who is a greenhorn in the legal business. Considering how high-profile the original case was, the father-daughter duo sees themselves being ostracised and insulted for raking it up again in the name of cheap attention. Only when the court proceedings begin, the public realises that Venba really means business and she is out to dig holes into an investigation that sealed the case even before the suspect got to chance to prove herself.

So why are Pethuraj and Venba interested in this old case? Why did Venba start her lawyering with this one? Was Jyothi really a serial killer? If not, who were the real perpetrators? Will Venba manages to snatch an impossible victory under the nose of her high-profile and shrewd opponent, Rajarathinam (Parthiban)? Answers for these and more are given out in the verbose proceedings of the court drama, as Jyothika waltzes from one incredible acting moment to another.

Like most of the films in her second innings, that are backed by her superstar husband Suriya, even Ponmagal Vandhal is just another showreel for how wonderful an actress Jyothika is. Be it deliverful powerful statements into the court or reliving an emotional trauma her character had once went through, Jyothika is simply fantastic in the scenes. Watch her exude a calming confidence in the scene where a chappal is thrown up her, and she coolly returns it to the thrower, saying she can't walk home with one slipper. Even Thalaiva would get up and clap for that!

There is hardly any doubt that Jyothika is the best part of the film, the only aspect that makes it worth a watch. 'Cos the rest of the film never really attempts to go out of her shadow. Jyothika Reacts to Ponmagal Vandhal Releasing on Amazon Prime, Explains the Reason for Opting for an OTT Platform.

Debutant director JJ Frederick has an intriguing premise, a pulsating mystery and a bunch of fine actors in his fold,and yet he only does a half-baked job with that. The USP of the film is definitely the legal banter between Jyothika and Parthiban's characters, and the films showers sparks when that happens. Especially in the first half. The movie raises a couple of  good questions - what's more important, seeking the truth or going to easy path that soothes the pain of the ones who lost? Does the accused not have the right to prove himself or herself innocent or is the police and the media trial enough?

The suspense grips you, as you are truly curious to find where Venba wants to take you for the answers. The flashback into Jyothi's past, as Venba reads her diary, is pretty poignant, especially the picturisation of the soothing "Vaan Thooralgal" track.

The interval revelation is also good, though you could really have smelt that development from a mile away. Post-interval, though, both the legal drama, as well as the writing, begins to lose steam.

There is a scene where Rajarathinam berates his junior who points out an aberration, saying such objections only happen in movies. Maybe it is time for filmmakers to avoid such cliched dialogues now, for they end up making the same mistake they point out pompously.

Instead of smart courtroom business, Ponmagal Vandhal, opts for the convenient path of verbosity. Venba goes into emotional monologuing that only works if you are in awe of the actress delivering it, and not because of the scene.

It is easy to see that she is clutching at straws, and Ponmagal Vandhal, taking a huge U-Turn from reality, indulges her and in turn, become a movie that, perhaps, might have worked better if you are watching it in a theatre filled with family audiences. On the smaller screen, though, I found the emotional resonance in the scene surprisingly hollow. Despite the fact that she is harping about something very concerning - child abuse, and Jyothika is acting the hell out of the scene.

Ponmagal Vandhal might have wanted to bring up this terrible crime as a revelation. But it fails to realise one thing - the viewer is smarter, he or she could have deduced that turn many scenes earlier. It may also have to do with how contrived the whole sequence is built up, with the film forcing a needless social media outrage moment in the narrative. You know the intentions are good, but you also crave the film could have steered them in a more effective way.

You can also blame the convenience tropes the makers put in to take the easy path and create needless drama. Like a scene where the judge (Prathap Pothen) confides to his close colleague that he is in dire need for money for his daughter's wedding. We know that this scene would have significance later on. Predictably, it does and yet it hardly matters to the plot.

Flashbacks are indulgently used in the second half, which would have worked better as dialogues. Even Venba's bonding with Pethuraj takes a complete backseat in the second half. The movie even gets to have its Jolly LLB and A Few Good Men moments.

Thankfully the second half still retains some sparks. The scene where Venba brings down a tycoon Varadharajan (Thiagarajan), whose son was one of the young men killed by Jyothi, is spiffing, with both actors breathing fire in their delivery.

The conclusion, however, seeks convenience again as it opts for a more pleasing ending. Even PINK did the same, but at least, the courtroom sequences before that, were done in a more engaging manner. The final twist involving Venba is bound to bring mixed reactions.

Visually, Ponmagal Vandhal is pleasing to look at, with Ramji's lenses using the beauty of its locales to great effect. Govind Vasanth's score is reminiscent of his '96 work, but it still creates magic in the film. especially in the emotional scenes.

- Her Scenes With Parthiban and Thiagarajan

Watch Ponmagal Vandhal for Jyothika, as the actress puts another fine show. However, you are in for a tightly-knit legal drama, then Ponmagal Vandhal falters in putting up strong statement for itself! The movie is streaming now on Amazon Prime Video.

(The above story first appeared on LatestLY on May 29, 2020 03:10 AM IST. For more news and updates on politics, world, sports, entertainment and lifestyle, log on to our website latestly.com).