Prabhas 21: Deepika Padukone Confirmed to Star Opposite the Baahubali Star in Nag Ashwin's Next

Yes, the makers of Prabhas' next have roped in Bollywood star, Deepika Padukone. The movie will be helmed by Mahanti director, Nag Ashwin. 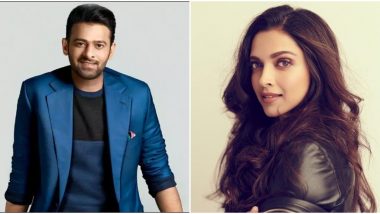 Pinch yourself all you want but this isn't a dream, a reality in fact. Yes, Deepika Padukone has proudly come on board as Prabhas' leading lady in his next with Mahanati director Nag Ashwin. The big announcement was made by Vyjayanthi Movies on their Twitter handle and the actor's fans cannot contain their excitement. While earlier we heard rumours of DP and Prabhas collaborating for a new project, the same has been officially confirmed by the makers of his next. If this doesn't define casting coup for you then we don't know what will. Radhe Shyam: Prabhas and Pooja Hegde’s Romantic Chemistry Garners Praises From Fans! (View Tweets).

Deepika's addition has certainly piqued our interest further in this big project. This will be the first time when DP will work with the Baahubali star and her third outing in a regional cinema. After Alia Bhatt's RRR with SS Rajamouli, Deepika is the second big name from Bollywood to have ventured into Telugu cinema that has a pan India appeal. Apparently, the Padmaavat actress demanded an exorbitant amount for her new outing and the makers were willing enough to accommodate all her demands. 5 Years Of Baahubali: Prabhas and Rana Daggubati Get Nostalgic With a Video Celebrating the Film's Best Moments (View Posts).

Producer C Ashwini Dutt in his earlier conversation with a leading Telugu daily revealed their plans of having a global release and what makes this project so much interesting. "Nag Ashwin (who is also Dutt's son-in-law) has penned a story that can amaze the world. It is the kind of story that the global audience will like to watch.  I was surprised on listening to it," he said.

When asked about when can we expect it to go on floors, the producer added, "The plan is to take the film to the floors this October. And the theatrical release will happen in April 2022." Earlier there were reports of how Alia Bhatt is being considered for this big project but Deepika eventually emerged as the big winner.

The film will be multilingual and will release in Hindi, Tamil and Telugu.

(The above story first appeared on LatestLY on Jul 19, 2020 11:18 AM IST. For more news and updates on politics, world, sports, entertainment and lifestyle, log on to our website latestly.com).