5 Years Of Baahubali: Prabhas and Rana Daggubati Get Nostalgic With a Video Celebrating the Film's Best Moments (View Posts) 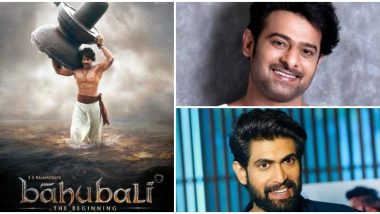 Baahubali, one of India's biggest films has now completed five years. It's unbelievable that it's five years since we met Prabhas' Shiva and also S S Rajamouli's gorgeous world of Mahishmati. The film garnered ample of praises for its action, cinematography and performances but most of all, left everyone with the urge to find out "Why Kattappa Killed Baahubali. The big cliffhanger had promised a second part and well, it was delivered in the most magnificent manner. Baahubali: The Beginning released five years ago on July 10, 2015. The film became a huge success at the box office and is one of the most-successful pan-India releases to come from the Telugu industry. Prabhas 20: Fans Thrilled to See the Title and First Look of Baahubali Actor’s Next with Director Radha Krishna Kumar! (View Tweets).

The film happens to be a benchmark for Prabhas and Rana Daggubati's career who enjoyed rave reviews and gained a massive fan following after this film. Recently, celebrating the 5-year journey of this film, both Rana and Prabhas took to Instagram to share a video edit showcasing the film's finest moments. The duo getting nostalgic about the film celebrated its milestone. Sharing the video on his account, Prabhas wrote, "Here’s to the team that created magic! Celebrating #5YearsOfBaahubali The Beginning." Also sharing the video, he wrote, "Feeling nostalgic." Sharing the video, Rana was all praises for it "Loved It."

The SS Rajamouli directorial also starred Tamannaah Bhatia, Anushka Shetty, Sathyaraj and Ramy Krishnan in lead roles. The film collected over 650 crores at the worldwide box office. In case you want to celebrate 5 years of this gem, you can stream the film on Netflix.

(The above story first appeared on LatestLY on Jul 10, 2020 08:40 AM IST. For more news and updates on politics, world, sports, entertainment and lifestyle, log on to our website latestly.com).