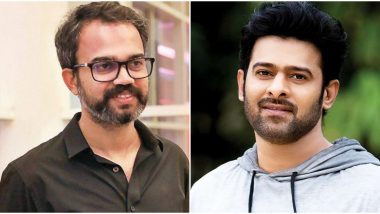 Prabhas undoubtedly has a huge fan base and movie buffs often keep looking for an update on his ongoing or upcoming projects. Prashanth Neel, the popular Kannada filmmaker, has also won hearts after delivering the blockbuster film, KGF Chapter 1. On the occasion of the ace filmmaker’s birthday, which is today, fans are not only extending birthday wishes, but many are also expecting a major announcement on Prabhas 22. Yes, if you checkout fans’ tweets, you’ll come across posts that reads Prabhas 22 will be helmed by Prashanth Neel. KGF Chapter 2 Director Prashanth Neel Turns A Year Older Today! Fans Extend Birthday Wishes To The Kannada Filmmaker On Twitter.

There are numerous tweets going on about Prabhas 22. In fact, since yesterday the micro-blogging site has been flooded with posts that reads ‘#Prabhas22 Update Tomorrow ???’. In fact, many even expect that Prabhas 22 will be bankrolled by Mythri Movie Makers. In December 2019, Cinestaan had reported that Mythri Movie Makers have offered Prashanth Neel a huge deal, Rs 30 crore, to direct a film with Prabhas and it would be a pan-India project. However, there was no official announcement made on it. The report had also mentioned that the actor – director duo might join hands in the second half of 2020. Prabhas' Next with Mahanati Director Nag Ashwin to Go On Floors in October, Film Will Release in April 2022.

Prabhas 22 To Be Produced By Mythri Movie Makers?

Prabhas 22 To Be Bankrolled By DVV Entertainments?

Both are pan India Movies#HBDPrashanthNeel

Will That Turn Out To Be True?

#Prabhas22 on the way 🔥 pic.twitter.com/06qxpFTb5X

Fans Are Waiting To Know

Today, Mythri Movie Makers shared a post on Twitter wishing Prashanth Neel on his birthday that led to further speculations. The post read, “Wishing @prashanth_neel garu, sensational Director and a gem of a Human very Happy Birthday Waiting to meet you soon in a Radiation Suit.” Rumours are also rife that it could be DVV Entertainments that would be producing Prabhas 22 under their banner. We’ll to wait for an official announcement to know who is directing and producing Prabhas 22.

(The above story first appeared on LatestLY on Jun 04, 2020 10:34 AM IST. For more news and updates on politics, world, sports, entertainment and lifestyle, log on to our website latestly.com).