Prabhas, who celebrates his 42nd birthday today (October 23), is a pan-India star. The superstar who rules hearts has some of the biggest projects in his kitty. 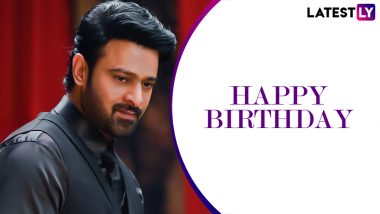 Prabhas is undoubtedly one of the popular names not just in the country, but across the globe. His performance in Bahubali is cherished even today. But the actor had sought breakthrough much before his performance in SS Rajamouli’s magnum opus. Some of his projects that brought him to limelight are Varsham, Chatrapathi, Billa, among others. Prabhas, who celebrates his 42nd birthday today (October 23), is a pan-India star. He has some of the biggest projects in his kitty. Fans Trend ‘Prabhas Birthday CDP’ On Twitter Ahead Of The Superstar’s Special Day!

It was in 2002 when Prabhas started his career. He made his debut with the film Eeswar. Since then he has been experimenting with roles and entertaining movie buffs. The charming actor is all set to win hearts with some of his upcoming projects. Audience will get to watch him in a different role again. On the occasion of Prabhas’ birthday, let’s take a look at his upcoming films. Adipurush: Pictures Of Prabhas From The Sets Of Om Raut’s Film Go Viral.

Radhe Shyam – Pooja Hegde is paired opposite the handsome hunk in this epic period romance. Written and directed by Radha Krishna Kumar, fans will get to watch a glimpse of Vikramaditya (Prabhas’ character) on the occasion of the actor’s birthday. The film is set to be released on January 14, 2022.

Salaar – Prabhas has teamed up with Prashanth Neel for an action flick. It would feature Shruti Haasan as the female lead. There were rumours doing rounds that this movie is a remake of  Ugramm, which was also helmed by Prashanth. However, the filmmaker clarified stating that it is an original story that has been written for the “Darling” (as Prabhas often called by fans) actor.

Adipurush – Fans would get to watch Prabhas play the role of Lord Ram as Adipurush. It would feature Saif Ali Khan as Lankesh. This flick that is slated to be release in August next year is touted to be one of the most expensive Indian films ever made.

Untitled Project With Nag Ashwin – Movie buffs are going to be in for a treat with this Nag Ashwin directorial that is reportedly under the name Project-K. It would feature the leading stars of the film industry – Prabhas, Deepika Padukone and Amitabh Bachchan. It is touted to be a sci-fi film.

Spirit – It is Prabhas’ 25th project and the announcement about it was recently made. The actor has collaborated with Sandeep Reddy Vanga for this film that it will be jointly produced under the banners of UV Creations, T-Series and Bhadrakali Pictures.

So these are the upcoming, magnum opuses featuring Prabhas in the lead. Just can’t wait to watch him on the big screens. Here’s wishing him tons of happiness and amazing projects in the future. Happy Birthday, Prabhas!

(The above story first appeared on LatestLY on Oct 23, 2021 12:01 AM IST. For more news and updates on politics, world, sports, entertainment and lifestyle, log on to our website latestly.com).