Malayalam actor Prithviraj Sukumaran's last release The Cold Case was a direct digital release. While the actor is kicked about the rise of digital platforms, he is waiting for the time when OTT platforms start production of content, instead of just acquiring them for release. 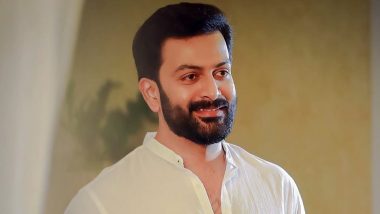 Malayalam actor Prithviraj Sukumaran's last release The Cold Case was a direct digital release. While the actor is kicked about the rise of digital platforms, he is waiting for the time when OTT platforms start production of content, instead of just acquiring them for release. "This whole phenomenon of designing a film for OTT platforms is still to find it's footing in India," Prithviraj tells IANS. Kuruthi: Prithviraj Sukumaran’s Action-Thriller Skips Theatrical Release; Will Premiere on Amazon Prime Video This Onam.

He adds: "Most of the films which have found their way to OTT platforms through direct premieres are films which were initially designed for theatres. So the difference is that when you think of that film, you also start thinking if this film is going to be subject to community viewing." Explaining how the vision of a film can differ as per the platform, the actor feels that creatively people can flourish better when they have clarity of the medium of release. Cold Case Ending Explained: Decoding the Twisty Climax of Prithviraj Sukumaran-Aditi Balan’s Amazon Prime Film (LatestLY Exclusive).

"While making a film, we think, 'are we designing something where 500 to 1,000 people are going to watch it together and part of the whole viewing experience is the experience of seeing it a crowd?'. Now, that is a different ball game. When you start thinking of making films like that, your language, aesthetics are slightly designed towards how it will be for community viewing," he says.

Coming to how digital films can be, he says: "If you start designing films from scratch on an OTT platform, you have a lot more liberty because in your conception, aesthetic you are not putting that at the mercy of community viewing. Which is why a film like 'Joji' - which was one of the few films from Malayalam - were designed to be an OTT premiere, so they had the liberty of staying and dwelling on instances in the film, something which you might not have if you release the film in theatres. So, I think down the line, we are going to creatively diversify."

He quickly adds: "It's great for the financials of the industry and it's also great creatively. So, I think it's a very interesting future ahead." With new releases coming in every week on digital platforms, it is needless to say that the digital platform is thriving. Prithviraj, who has now dived deep into the production of his second directorial 'Bro Daddy', feels direct digital productions can benefit Indian film industries the most.

"What I am looking forward to, is now OTT platforms sanctioning content for feature films and not acquiring or buying films. That will be the future when there will be direct productions by OTT. That will be great that you spot content, and give platform to new talent. Especially in a country like India, where there is no one industry. There are so many cultures and aesthetics and talent. It's like a gold mine," shares the actor.

(The above story first appeared on LatestLY on Jul 28, 2021 10:31 PM IST. For more news and updates on politics, world, sports, entertainment and lifestyle, log on to our website latestly.com).