Cold Case is the new Malayalam film that has gone for a direct OTT release on Amazon Prime Video. Directed by debutant Tarun Balak, the movie stars Prithviraj Sukumaran and Aditi Balan in the lead. Cold Case is a murder mystery investigative thriller with supernatural themes. 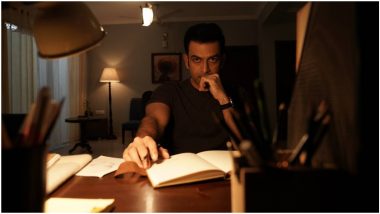 Cold Case is the new Malayalam film that has gone for a direct OTT release on Amazon Prime Video. Directed by debutant Tarun Balak, the movie stars Prithviraj Sukumaran and Aditi Balan in the lead. Cold Case is a murder mystery investigative thriller with supernatural themes. Having begun streaming on Amazon Prime Video from late night of June 2021, early reviews are in, and the film has been getting mixed response from fans and critics. Cold Case Movie Review: Prithviraj Sukumaran and Aditi Balan's Spooky Mystery Thriller is Bogged Down By Predictable Twists.

Cold Case is about an investigation into the grisly discovery of a skull found near a river, conducted by ACP Satyajith (Prithviraj Sukumaran), tasked to identify the corpse and its killer. In another location, a TV presenter and single mother Medha (Aditi Balan) is spooked by certain haunted happenings in her new rented house. (Warning: SPOILERS AHEAD).

These two threads intertwine when Medha realises the spirit haunting her house, or rather the refrigerator in the house, is of Eva Maria (Athmiya Rajan), the same person whose death is being investigated by Satyajith. Towards the end, we find out who killed this rich, orphaned and divorced woman and what happens to her. And how Eva is not the only ghost haunting Medha's family.

It turns out that Eva was killed by her friend Advocate Haritha (Lakshmi Priyaa Chandramouli), who also happened to be Medha's friend. Haritha, who was in desperate need for money, strangles her friend to death one night and chops off her body to dispose it off easily. So that she can put her hands on Eva's properties and bank savings, Haritha begins to impersonate her. Cold Case Song Eeran Mukil Out! Prithviraj Sukumaran and Aditi Balan’s Slow Melody Takes You on a Mysterious Ride.

As Eva was divorced and had no living family for speak of, all Haritha need to do was keep up the ruse that Eva is alive. She uses Eva's phone to message her friends and acquaintances from time to time. She creates a fake Aadhar id of Eva using her picture to sell her properties. Haritha even goes to Varanasi in pretext of Eva going on a spiritual journey and takes pictures of the temples there, before she disposes the phone and offers the ruse that Eva has weaned herself off social media.

That's where things go wrong. Haritha planned to escape with her money from there, but due to COVID-19 first wave lockdown, she was forced to return to Kerala under her false name. She had also used her picture to sell Eva's properties, so Satyajith figured out how she looked like, while his uncle who was on the same bus as she - quite a coincidence there - later saw her in a lawyer's robes at the High Court. However, before Satyajith could get her arrested, Haritha gets a very gruesome comeuppance for what she has done.

Haritha, after realising that Medha could discover her bloody handiwork, goes to her house when the latter is out meeting Satyajith. While going through her files, Medha is shocked by the rattling of the refrigerator. It was her own fridge, where she had preserved Eva's body parts before disposing them, and then had got the fridge sold off to a thrift shop, and it has then been sold to the owner of Haritha's house.

Haritha is clueless that the fridge is now possessed  by the spirit of her victim, and we are clueless as to why that terrible shaking and the seeping of blood don't make her run from the scene. She opens the fridge to find the body parts wrapped in plastic in it. Before she open them, the screen shifts outside to the house and we hear her scream.

Haritha's body is discovered the next day at the house, and the medical reports claim she died from the propane leak blast from the refrigerator. Medha knew that wasn't the case, and she asks Satyajith if he now believes that her house is haunted.

Satyajith, who didn't encounter any paranormal happenings, tells her that what she has to say may be true, but he wants to believe in the logical side and sees Hartiha's death as from the accidental blast. The conflict here is a symbolication of Cold Case's two pronged approach of solving the mystery - one, through proper investigational procedure, and other through otherworldly hints. Though, unlike the oblivious ACP, we know what really happened. Wish the film could have kept it ambiguous instead, so that this conflict could have had better value.

As is with the films in this genre, Cold Case ends with a sequel bait scene. Remember how the movie tried to mislead us by thinking the doll that Medha's daughter was playing with was supposed to be the harbinger for the spirit a la Annabelle? Well, that turned out to be false, when the fridge turned out to be the culprit. But the last scene gave us the feels that the doll is not all innocent. And quite creepy too, without one of its eyes!

The final scene has Medha and her daughter back at her mother's house, where the kid is singing to the doll, as the camera pans to Medha trying to adjust the frequency of her transistor before it moves to the portrait of her dead sister on the wall. We see the glass pane of the picture cracking. The scene then jumps to Suchitra Pillai's Zara Zacchai, the blind occultist, whose eyes once again turn to white as whenever she comes across anything ghostly.

The scene hints that Medha and her family are now being haunted by the spirit of the dead sister. In an earlier conversation, we have learnt that the circumstances around her death were mysterious. She was studying parapsychology, and after returning from a trip, she goes to her room and end her life without leaving any reasons for he drastic step. At one point in the film, we were made to assume that Eva's spirit could have been hers. Interestingly, the doll was given to Medha's daughter by her sister, so we can assume that the toy is now containing her spirit?

So what happened during that excursion that made the girl end her life? Did she encounter anything beyond comprehension, the repercussions of which were too much for her to live? Or did a spirit or a human kill her? Why is no one wearing a mask, despite being set in present times and Cold Case acknowledging the pandemic?

Sorry, the last question was just out of an irritating curiosity and has nothing to do with the end-mystery! Though the bigger question to ask here is, will Cold Case have a sequel after the 'cold' reception it got! Cold Case is streaming on Amazon Prime Video.

(The above story first appeared on LatestLY on Jun 30, 2021 05:22 PM IST. For more news and updates on politics, world, sports, entertainment and lifestyle, log on to our website latestly.com).