Priya Prakash Varrier aka the 'Wink Girl' Makes TikTok Debut and She's Already Creating a Storm With Her New Videos! 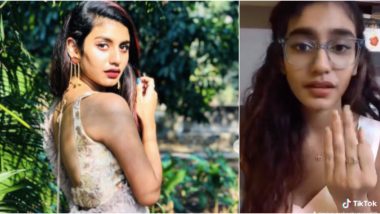 Priya Prakash Varrier who is better known as the 'wink girl', rose to fame thanks to her amazing expressions in one of the songs from her debut film, Oru Adaar Love. After becoming an overnight sensation on social media, Priya Prakash's fan following shot up in no time as she went viral with the song "Manikya Malaraya Poovi". After her first film, Varrier once again came into news for her second film which was titled Sridevi Bungalow and was slammed for referencing Bollywood actress 'bathtub' death in a poor taste. Well, once again Priya is back in the news and this time it is for all the right reasons as she has now made her debut on TikTok. ‘Wink Girl’ Priya Prakash Varrier Says Her Parents Are Still CLUELESS About What Made Her Video Viral.

TikTok has become the new sensation and with the coronavirus lockdown, almost all celebrities have turned to this app to make entertaining videos. Priya started off by sharing a couple of videos where she's acting out some of the most famous Malayalam dialogues. Sharing the video on Instagram, Varrier wrote, "So for those of you who don’t know it yet,I’ve joined tiktok guys!Its only been a few days but the love has been pouring in.Thank you so much." Priya has made a couple of videos already but fans are now hoping that she does a few Hindi videos too! First Wink and Now Kiss: Priya Prakash Varrier Is Ruling the Internet All Over Again (Watch This Viral Video).

So for those of you who don’t know it yet,I’ve joined tiktok guys!Its only been a few days but the love has been pouring in.Thank you so much💙

Here's Another Funny Video From the 'Wink Girl':

Priya Prakash Channels in Her Romantic Side on TikTok:

Well, given the kind of love she had received during Oru Adaar Love, we are sure fans are going to show the same kind of support for her TikTok stint too. While this is only the start, we are waiting to see Priya Varrier do some more funny videos too.

(The above story first appeared on LatestLY on May 09, 2020 02:50 PM IST. For more news and updates on politics, world, sports, entertainment and lifestyle, log on to our website latestly.com).