Rana Daggubati: Will Work Towards Making Hyderabad the Movie Capital of India

Lauding the ministers of Telangana, who were present at the event, Rana thanked the government of Telangana for being understanding, regarding the problems faced by the movie industry. 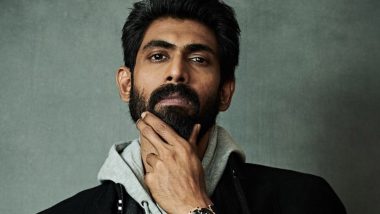 Rana Daggubati, who spoke at the pre-release event of Bheemla Nayak, stated that he will work towards the development of the movie industry and would collaborate to make Hyderabad the movie capital of India. As Rana spoke at the event, he expressed that he had worked with multiple personalities in the movie industry, but Pawan Kalyan was really special. "My upcoming movies will have Pawan Kalyan's influence", the Bhallaladeva from 'Baahubali' said. Bheemla Nayak: Pawan Kalyan’s Mass Entry Is Unmissable and Rana Daggubati Looks Fierce as Makers Unveil a New Trailer Ahead of the Film’s Release! (Watch Video).

Lauding the ministers of Telangana, who were present at the event, Rana thanked the government of Telangana for being understanding, regarding the problems faced by the movie industry. "I thank Kalvakunta Rama Rao, Talasani Srinivas Yadav, and the Telangana government for being helpful. Your positive approach towards the Telugu movie industry will help us grow. I promise to myself, to work towards making Hyderabad the movie capital of India", Rana said. Rana Daggubati’s Film 1945 Premieres On OTT Platform Without Proper Climax; Here’s What Twitterati Have To Say.

Slated for its release on February 25, the pre-release event of Pawan and Rana- starrer 'Bheemla Nayak' took place in the Yousufguda grounds in Hyderabad, on Wednesday. Telangana's IT Minister KT Rama Rao and Cinematography Minister Talasani Srinivas Yadav were invited as the chief guests by the makers of Bheemla Nayak. KTR, who spoke at the event conveyed his best regards to the 'Bheemla Nayak' team.

Earlier on Thursday, the IT Minister of Telangana, KTR took to his Twitter, as he wrote, "Took a break from my routine to greet my brothers @PawanKalyan garu @RanaDaggubati & @MusicThaman & director Sagar Chandra for their upcoming movie #BheemlaNayak. Lovely to meet some brilliant musicians such as Padmasri Mogilaiah Garu & Sivamani Garu". Rana plays a powerful, hot-headed opponent named Daniel Sekhar, while Pawan will reprise a cop in 'Bheemla Nayak'.

(The above story first appeared on LatestLY on Feb 24, 2022 05:05 PM IST. For more news and updates on politics, world, sports, entertainment and lifestyle, log on to our website latestly.com).