Saif Ali Khan As Lankesh In Adipurush: Netizens Go Crazy After The Actor Comes On Board For Prabhas' Next (View Tweets)

Saif Ali Khan is all set to play the role of a baddie in Om Raut's next Adipurush which stars South superstar Prabhas in the lead role. Read on. 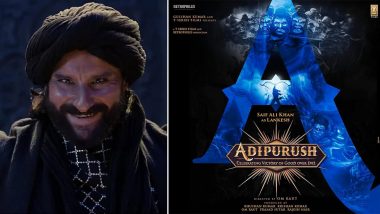 It was on August 18, 2020, sharp at 7.11 AM, when filmmaker Om Raut announced his upcoming saga titled Adipurush with South superstar Prabhas. And now cut straight to today (September 3) at 7.11 AM again, the makers unveiled the villain of the tale and its none other than Saif Ali Khan. Yep, you read that right Saif will be portraying the role of antagonist Lankesh (Raavan) in Adipurush. Prabhas, on the other hand, will be seen as Ram in the film. This collaboration of Saif and Raut is their second one together after Tanhaji: The Unsung Warrior. "7000 years ago existed the world's most intelligent demon!," the makers captioned the post. Adipurush: Saif Ali Khan Confirmed to Play the 'Demon Lankesh' in Prabhas' Next with Director Om Raut.

As soon as this big news was all over the internet, fans went crazy and rejoiced. Saif Ali Khan was last seen playing a grey shade in Tanhaji as Udaybhan for which he garnered a lot of appreciation from fans and critics alike. Coming back to Saif as Raavan, well, check out the Twitter reactions below and you'll know the excitement online. Adipurush: Nag Ashwin Excited to See Prabhas as Lord Rama in Om Raut’s Film (View Tweet).

So it will be Saif Ali Khan as #Lankesh in #Adipurush

Here is a Small GIF 🥁

Saif will be perfect for Ravan's role

Can't wait to see the magic on big screen🔥😍#Prabhas#Adipurush

Saif in his conversation with TOI talked about his role in the film. He said, “I’m thrilled to be working with Omi dada again. He has a grand vision and the technical knowledge to pull it off. I’m thrilled to be a part of this project. I look forward to clashing swords with the mighty Prabhas and to play a role that is electrifying and demonic.”

Adipurush is said to be a 3D extravaganza that will be made in Hindi and Telugu and then dubbed in Tamil, Malayalam, Kannada, as well as several other languages. After this, now we wait for other iconic characters from the movie to be out soon like Sita, Lakshman etc.

(The above story first appeared on LatestLY on Sep 03, 2020 08:45 AM IST. For more news and updates on politics, world, sports, entertainment and lifestyle, log on to our website latestly.com).