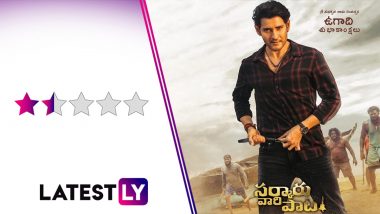 Sarkaru Vaari Paata Movie Review: The most annoying thing for me as a cinephile is when a talented storyteller gets to work with a huge superstar and then he has to compromise on his skills for fan-servicing moments. Director Parasuraman's last movie Geetha Govindam was an enjoyable affair, albeit with some problematic tropes, but still quite an engaging watch. I wish I could say the same about his latest, Sarkaru Vaari Paata (Government Auctioned Rate), where he works with Telugu superstar Mahesh Babu. Sarkaru Vaari Paata is a film that is measured, cut, and sewn for Mahesh Babu's fans, but is a tiring watch for the rest. Sarkaru Vaari Paata Box Office: Can Mahesh Babu’s Film Repeat the Pan-India Success of Allu Arjun’s Pushpa?

As a child, Mahi sees his parents die by suicide after failing to pay the debts to the bank. Brushing that trauma aside, he grows up to be a dashing big-time moneylender in Miami, USA. No questions asked on how he managed that growth, which could have been a far more compelling story than what we get here.

Mahi is insistent that everyone pays the installments back on time, and he knows how to recover them sometimes right in the middle of a gang war. To him comes Kalaavathi (Keerthy Suresh), a gambling-addicted brat who is in heavy debt. She tricks Mahi into falling for her and get him to lend her money, and once her play gets exposed, refuses to pay him back and even threatens him using her father's influence. To get back his money, Mahi goes to Vizag to meet her father, Rajendranath (Samuthirakani), a powerful MP and industrialist.

The first half of Sarkaru Vaari Paata is colourful and somewhat breezy and light-hearted, with concerted efforts to make Mahesh Babu look dashing (as if he needed any) and Keerthy glamorous. While the setup of their 'love story' passes muster and problem-ridden (the hero stalking the heroine trope), there were some light moments that were enjoyable. S Thaman's "Kalaavathi" song is a highlight here. I also thought that through Kalaavathi's fake getup to ensnare Mahi, the movie was trying to poke fun at the mainstream hero's obsession for only wanting to romance a girl who has a desi outlook. Alas, how wrong I was!

It is around the interval, where Sarkaru Vaari Paata actually decides to bring back its actual plotline. As Mahi conflicts with Rajendranath, he also tries to expose the failings of the Indian banking system, where rich men get away even if they default on loans of thousands of crores, while the poor and the middleclass have to bore the brunt of recovery agents, and rising EMIs. Worthy topic to explore indeed, but the writing is so weak and flawed in these sequences that you can't help but with gape with incredulity at what is unfolding before you. That is, if you aren't bored by the archaic treatment of making the hero larger than life that you decide to spend that time checking your phone. Sarkaru Vaari Paata Title Song Is A Power-Packed Number From Mahesh Babu’s Upcoming Telugu Film (Watch Video).

Look, I know that you have to watch these movies with many pinches of disbelief. I have grown up watching such movies in three languages. I am not saying I was rolling my eyes when Mahi crashes two motor boats with his bare hands (though I did). I am not saying about how fight sequences become meaningless when you are showing your protagonist as this overpowered being, who is seemingly indestructible, that it takes the stakes out of those fights. I am not saying how the hero, while going after Rajendranath, runs conveniently into every character crucial to the villain or in the hero's past.

I am not saying about the villain's immaculate patience to allow the hero to complete his monologues, even though he could have stopped him anytime. Why, when Mahi claims that Rajendranath owes him 10000 crore rupees in a presscon, Rajendranath could have easily exposed him then and there. You can't help but admire the villain's magnanimity in respecting what was a very non-existent challenge, and then allow the hero to easily upstage him in their various confrontations. And this is a man who had so much clout that he had once sent Miami cops to confront Mahi.

But when you are tackling something as concerning as banking measures and debtor suicides, I wish Sarkaru Vaari Paata would also have been serious in how Mahi tries to handle these issues. Instead, the movie uses these issues to glorify the lead character instead, as everyone either listens to this random stranger, or gets manhandled into listening, and then start a revolution that is as silly as it comes. Only if it was so easy, man. Only if it was so easy...

Oh, and like the movie, I almost forgot Keerthy Suresh is there too. Why, I have no clue. I understand the National Award-winning actress wants to take a break from her serious roles - she was outstanding in last week's Saani Kaayidham - and appreciate her glam turn here. But glam turn doesn't mean that your character shouldn't have meat in the role. It was annoying to see how her character is tamed to submission in the second half of the movie by the hero acting like a total arse towards her in revenge, although it was entirely his fault that he was gullible and desperate enough to fall for her in the first place. Although Sarkaru Vaari Paata doesn't headline it strongly, it once again maintains that good Indian girls don't drink or gamble but wear desi clothes and have jasmine flowers on her hair. Yo or Hell No? Keerthy Suresh in a Falguni & Shane Peacock Saree for 'Sarkaru Vaari Paata' Pre-Release Event.

The only scene in Sarkaru Vaari Paata that actually touched me came near the end. It was a sequence between Mahi and Nadhiya Moidu's character with a surprise little twist, and a subtle conversation that works. Wish the rest of the movie had more such scenes.

PS: What's with some of the dialogues in the movie? Apart from the now infamous "1000 Viagras" line, there is also another gem after bashing some goons, Mahi asks Rajendranath what happens when you send a small fish to date a whale. Huh, what in the world does that unholy interspecies sexual line mean?

- Colourful Sequences in the First Half

- Overlong, Overblown Treatment of the Second Half

- Trivialisation of a Serious Topic

As with every A-lister mass movie, I do expect Sarkaru Vaari Paata going down well with Mahesh Babu fans (though not so much with Keerthy Suresh's). Even when I was bored, I could hear a couple of his diehard fans whistling at his fights and his dance moves in the song "Ma... Ma... Mahesha". If hero-worshipping is your kind of entertainment, Sarkaru Vaari Paata has that in plenty, including the aforementioned song. Otherwise, this is a cumbersome watch that defies logic, subtleties, content and patience.

(The above story first appeared on LatestLY on May 12, 2022 02:10 PM IST. For more news and updates on politics, world, sports, entertainment and lifestyle, log on to our website latestly.com).