SS Rajamouli's RRR to Be the First Film to Resume Shoot With a Limited Crew Following Social Distancing Guidelines?

While we know that the crew had been working hard from home while in lockdown, it seems the film may now become the first one to get on the ground for its shoot. 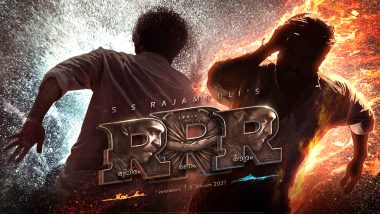 Coronavirus lockdown had resulted in all film shoots being put on hold. Currently, as India gears up for the fifth phase in lockdown where. relaxations are being made, filmmakers are planning to begin shoots with small amount of crews on board. If reports are to go by, SS Rajamoul's much-awaited magnum opus, RRR is all set to begin shooting soon. While we know that the crew had been working hard from home while in lockdown, it seems the film may now become the first one to get on the ground for its shoot. RRR: Jr NTR Introduces Ram Charan’s Look As Alluri Sitarama Raju, The Fierce Revolutionary Freedom Fighter! (Watch Video).

Recently, Times Of India reported that Rajamouli is planning to begin shooting for the film with a limited crew in the coming week and will also be sharing a special video from the set, showing how they are practising social distancing while working. Fans have been desperately waiting for this film that stars big names such as Ram Charan, Jr NTR in lead roles. It also marks the South debut of Alia Bhatt. RRR: SS Rajamouli to Further Postpone the Release Of Ram Charan and Jr NTR Starrer, Courtesy the Coronavirus Outbreak.

RRR is a period drama that revolves around the freedom fighters, Komaram Bheem and Alluri Seetharamaraju in the pre-Independence era. While we have already seen the first look of Ram Charan, fans were excited to see and Jr NTR's look on his birthday but due to lockdown it couldn't be released. With RRR's shooting, Rajamouli and team can certainly set an example for other film crews on how to work keeping in mind the social distancing guidleines and we can't wait to see how the RRR team will manage that.

(The above story first appeared on LatestLY on Jun 03, 2020 09:44 AM IST. For more news and updates on politics, world, sports, entertainment and lifestyle, log on to our website latestly.com).