Sudheer Babu Gets Nostalgic About His School Days, Shares a Throwback Pic of Getting the Runner-Up Medal for Badminton 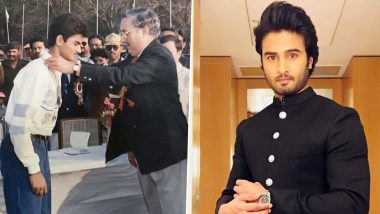 Southern star Sudheer Babu went down the memory lane as he shared his school picture in a new post on social media. Sudheer took to Instagram to share the throwback picture of his from his school days. In the image he is seen receiving a medal. "A nostalgic throwback to National School Games ... That's me receiving the runner up medal for badminton," he wrote alongside the image. Sudheer Babu Birthday: This Tollywood Hunk Is A Fitness Freak And His Insta Posts Are Enough To Prove!

Sudheer is a former badminton player. He was ranked number one in Andhra Pradesh and has played alongside Pullela Gopichand as a doubles partner once. He made his acting debut with the film "Ye Maaya Chesave" in 2010 and was later seen in films like "Shiva Manasulo Shruti", "Mosagaallaku Mosagaadu" and "Nannu Dochukunduvate" among many others. He currently awaits the release of his next titled "V". Sudheer Babu’s Fans Get the Perfect Treat! Makers of ‘V’ Release Actor’s Chiselled Look on His Birthday.

A nostalgic throwback to National School Games ... That's me receiving the runner up medal for badminton🏸🥈😊 Pic Credits : Chetan Anand

"V" is an action thriller directed by Mohan Krishna Indraganti. The film also features Nani, Nivetha Thomas and Aditi Rao Hydari in the lead roles. "V" was scheduled to release in March, but now has been pushed due to the outbreak of coronavirus.

(The above story first appeared on LatestLY on Jul 05, 2020 02:20 PM IST. For more news and updates on politics, world, sports, entertainment and lifestyle, log on to our website latestly.com).