Thala Ajith Starrer Valimai to Release on May 1, 2021?

The coronavirus outbreak has drastically affected the show business. From the films getting pushed back to the shootings been stalled, everything has come to a standstill. Thala Ajith’s upcoming flick Valimai faced the same issue. 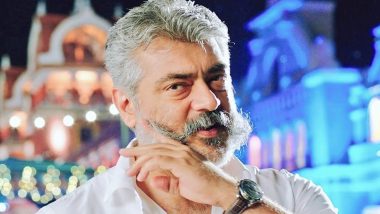 The coronavirus outbreak has drastically affected the show business. From the films getting pushed back to the shootings been stalled, everything has come to a standstill. Thala Ajith’s upcoming flick Valimai faced the same issue. The shooting of this H Vinoth directed film had to be suspended due to the ongoing global crisis. The makers had planned to release the film during the time of Diwali this year, unfortunately, that cannot happen. Now rumours are rife that the makers of Valimai are planning to release the movie on May 1, 2021, reports FilmiBeat. Thala Ajith’s Valimai to Release on Diwali 2020, Confirms Boney Kapoor!

The makers have not made any official announcement on the release date of Valimai. But if the reports are to be believed, then fans know it why the makers must have opted for May 1. It is extremely special as on that day Thala Ajith would be celebrating his 50th birthday. It would indeed be a grand celebration. As per a report in India Glitz, 60% of the shoot has been completed and the makers had planned to complete the remaining portions in abroad. The report also mentions that the team will be shooting the remaining portions only after the current crisis is well contained. Valimai: Thala Ajith to Shoot an Important Action Sequence in Spain?

Now there are several makers of big budget films in Tamil Cinema who have resumed post-production work from May 11. It includes Indian 2, Raangi, Chakra, Ka Pae Ranasingam, Master, Doctor, and many others. It was in the beginning of this month when a group of producers along with members of Film Employees’ Federation of South India had requested the Tamil Nadu government to grant permission to resume the post-production work of the pending films.

(The above story first appeared on LatestLY on May 14, 2020 02:52 PM IST. For more news and updates on politics, world, sports, entertainment and lifestyle, log on to our website latestly.com).