After the smashing first look, the teaser of Thambi starring Karthi along with his sister-in-law and actress Jyotika together on-screen for the first time is here and it looks interesting. Check out the teaser of the action drama inside. 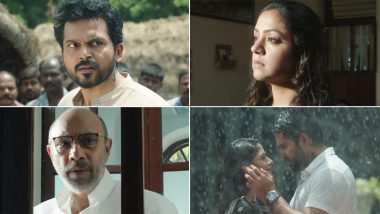 After the first look of Karthi and Jyotika's upcoming film, Thambi was released on November 15, makers have now released a teaser of the film. The Jeethu Joseph film sees Karthi and Jyotika share screen space for the first time. The first look of the film was unveiled by Suriya and now the teaser was launched by Mohanlal and Nagarjuna. The film also has a Telugu version which has been titled Donga. We have to say the teaser is quite intriguing and action-packed too. Thambi First Look: Karthi and Jyothika's Film With Jeethu Joseph Gets a Title, Teaser Date OUT.

In the teaser, we see Karthi as an imposter and Jyotika as his sister who is waiting to see her brother. Karthi's character has been titled Saravanan in the film and many will find it interesting given that it is the original name of Jyotika's husband and superstar Suriya. The film also stars Sathyaraj, Nikhila Vimal and Anson Paul in key roles. The teaser shows Karthi's character pulling off some action sequences whereas Jyotika brings the emotional vibe to the film.

Check Out the Teaser of Thambi Here:

Ahead of the teaser release, Karthi had tweeted saying, "#Thambi #Donga has been planned for more than a year. Happy with the way it’s shaped up. Thanks to #JeethuJoseph sir for making it a very enjoyable experience & to #SurajSadanah for making it all happen. Hope you guys like it too!"Kaithi Review: Twitterati Give Karthi's Action Thriller a Thumbs Up.

Karthi is fresh out of the success of Kaithi which won him a lot of praises. As for Jyotika, she is currently busy with Pon Magal Vandhal, directed by JJ Frederick. She was last seen in Jackpot, which also starred Revathi. Thambi is all set to release in December 2019.

(The above story first appeared on LatestLY on Nov 16, 2019 11:57 AM IST. For more news and updates on politics, world, sports, entertainment and lifestyle, log on to our website latestly.com).