Thambi First Look: Karthi and Jyothika's Film With Jeethu Joseph Gets a Title, Teaser Date OUT

The film also stars Sowcar Janaki, Master Ashwanth, Sathyaraj and Anson Paul in crucial roles. The music part is handled by Govind Vasantha while the cinematography is done by RD Rajashekar. The teaser of the film will be out on Saturday. 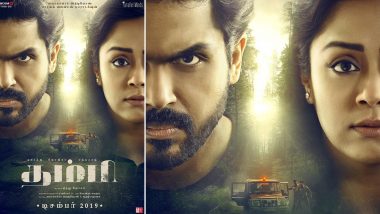 Karthi's fans are in for a huge treat as the makers finally revealed the title and the first look of his next film. Named as Thambi, the flick has him and his real-life sister-in-law Jyothika in the lead. After his last smashing performance in Kaithi, Karthi's fans were eagerly waiting for this next Tamil entertainer. He has collaborated with director Jeethu Jospeh, doubling the excitement of the fans. The teaser of the film will be out on Saturday (16 November, 2019).

The first look of the film seems intense and interesting. In the picture, we can see half faces of Karthi and Jyothika with serious stares. Also, in the backdrop, we can see a jeep in the middle of a jungle where two policemen are searching someone. Now, we are unsure about the plot as there were reports that Karthi is supposedly playing the con-artiste in this action-comedy oriented flick. Check out the poster below.

#Thambi #Donga has been planned for more than a year. Happy with the way it’s shaped up. Thanks to #JeethuJoseph sir for making it a very enjoyable experience & to #SurajSadanah for making it all happen. Hope you guys like it too! #ThambiTeaserFromTomorrow pic.twitter.com/XZao8QDEKx

TOI earlier quoted a source revealing, "But Karthi will be playing a con artiste, with shades of grey, in the film. He has a colourful character, and Jyotika’s role will be starkly opposite, and director Jeethu Joseph had ensured that the intensity of their characteristics get highlighted." The film also stars Sowcar Janaki, Master Ashwanth, Sathyaraj and Anson Paul in crucial roles. The music part is handled by Govind Vasantha while the cinematography is done by RD Rajashekar. Coming back to the picture, are you excited for the upcoming Karthi blockbuster?

(The above story first appeared on LatestLY on Nov 15, 2019 07:29 PM IST. For more news and updates on politics, world, sports, entertainment and lifestyle, log on to our website latestly.com).