Trisha Birthday Special: 96, Mankatha, Athadu – 5 Best Movies of Your Fave Tamil Actress and Where To Watch Them Online!

From 96 to Athadu, here's looking at the top five films of the birthday girl Trisha which are must-watch. In case, you don't know where to watch these films online, fret not, as we've got you covered. 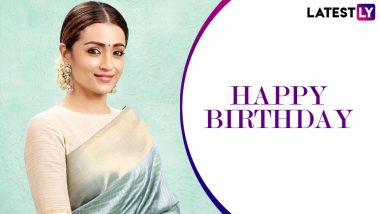 Trisha Krishnan, fondly known as Trisha is one of the most sought-after actresses from South showbiz. She entered the world of glitz and glam after winning a few beauty pageants. Her first Tamil film was Jodi (1999) in which she played a supporting role, followed by a full-fledged lead role in the 2002 movie Mounam Pesiyadhe. Having said that, the actress is a charmer on screen and that’s one of the reasons why she has a massive fan following online. And as today (May 4), Trisha celebrates her birthday, we would like to appreciate her work by listing top five films of the actress which are must-watch. So, let's begin. Trisha Walks Out Of Chiranjeevi's Acharya Citing 'Creative Differences' - Read Tweet.

With an IMDb rating of 8.6, this film of the actress is one of her best works. Starting Vijay Sethupati as the male lead, the movie revolves around two friends who meet after 22 years and reminisce about their past. The flick also snatched SIMA and Filmfare award for Trisha.

Where to Watch: Amazon Prime Video

Up next, it’s Trisha’s romantic film opposite Silambarasan. The actress played the role of a Christian woman Jessie wherein her crackling chemistry with Simbu was highly praised.

Even though the movie was a multi-starrer, Trisha made an impact in Mankatha. This one can be termed as one of the most successful movies of her career. The movie is based on all things smuggling and also starred Ajith Kumar, Arjun, Raai Laxmi, Anjali, and more. Mohanlal and Trisha Krishnan Starrer Ram Is Suspended Due to the Pandemic and Not Shelved, Clarifies Director Jeethu Joseph.

Where to Watch: Disney+ Hotstar

Based on the lines of the Hollywood movie Father of the Bride, Abhiyum Naanum showcased a lovely bond between an overprotective father and his daughter. Apart from Trisha, it starred Prakash Raj and Ganesh Venkataraman.

Where to Watch: Amazon Prime Video

Last on the list is Mahesh Babu and Trisha’s action romantic film which has a score of 8.2 and 95% on IMDb and Rotten Tomatoes respectively. With an intriguing storyline and sincere performances, this one should be on your watch list for sure.

Where to Watch: Disney+ Hotstar

That’s it, guys! These are the films starring the one and only Trisha that needs your attention. To note, all the movies mentioned above cannot be watched if you don’t have a subscription on the said OTT platforms. LatestLY wishes Trisha a very happy birthday.

(The above story first appeared on LatestLY on May 04, 2021 08:21 AM IST. For more news and updates on politics, world, sports, entertainment and lifestyle, log on to our website latestly.com).