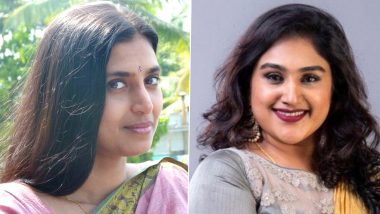 South actress Vanitha Vijayakumar and her marriage with Peter Paul has been in the news for quite sometime. The controversy surrounding their marriage also received reactions from fans as well as the industry people. For the uninitaied, Elizabeth Helen has filed a police complaint and claimed that Peter has not divorced her yet. Hence, she is now questioning his second marriage with Vanitha. Kasthuri Shankar had a war of words over this issue with Vanitha post which the latter has deleted her social media accounts. Bigg Boss Tamil 3 Fame Vanitha Vijayakumar Reacts to Husband Peter Paul Receiving a Legal Notice From His Ex-Wife.

As per the recent development on the controversy, Kasthuri and Vanitha had a social media spat. Later, Vanitha deleted her Twitter account, made her Instagram account private and also disabled the comments section of YouTube channel. The actress has totally gone off the social media and this might remain until the situation finds a solution.

Vanitha blocked Kasthuri after her tweet that read, "bayanthuttiya kumaru ? Fraidy cat :))The world now knows who provokes others, and if others hit back, you abuse them & run away. Singapenn Please note that till this minute, I have never questioned your personal life choices, But only your cheap PUBLIC actions." After getting blocked, Kasthuri once again tweeted, "Good riddance ! Keep blocking all other remaining good people who dare to question you, and surround urself with crap that keeps cheating you. I actually feel sorry for you. If there is any humanity left in you, I am ready to help even now to find peace and happiness." As of now, Vanitha's social media presence remains restricted. Stay tuned for more updates.

(The above story first appeared on LatestLY on Jul 21, 2020 07:05 PM IST. For more news and updates on politics, world, sports, entertainment and lifestyle, log on to our website latestly.com).