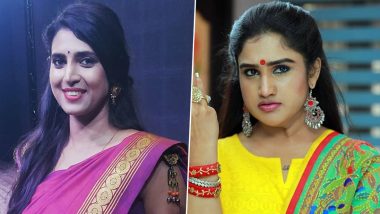 On June 27, Vanitha Vijaykumar tied the knot with Peter Paul in Chennai. It was an intimate ceremony, owing to the ongoing global crisis, with family and close pals in attendance. Pics from her wedding ceremony was all over the internet and then things took a turn when Peter’s first wife Elizabeth claimed that they are not officially divorced. This news had spread like wildfire and Lakshmy Ramakrishnan had shared a post in which the actress-director mentioned that she is shocked to know about it. This did not go down well with Vanitha and she responded with a series of tweets asking Lakshmy to mind her own business. And now Vanitha has engaged in war of words with Kasturi Shankar on Twitter over the same matter. Bigg Boss Tamil Season 3 Fame Vanitha Vijaykumar Marries Peter Paul - Check Out their Happy Pictures.

Lakshmy Ramakrishnan had recently shared that Elizabeth had called her and spoken to her. Kasturi Shankar saw this video and advised Lakshmy to not get involved with a person like Vanitha. Kasturi tweeted, “My heart bleeds for you @LakshmyRamki. Please do not  engage with cheap kuzhayadi sandai people. @vanithavijayku1, You are really making this so bad for yourself.  Take a break.” She also wrote, “Hypocrite Vanitha is guilty of cyber abuse, attacking the modesty of a woman, and defamation. She filed police case on surya Devi for abusing her, She has done the exact same offence toward madam Lakshmy Ramakrishnan . She can be arrested.” For the unversed, Vanitha had filed a case against Ravindar Chandrasekaran and Surya Devi for making comments on her personal life. Vanitha Vijaykumar Reacts to Husband Peter Paul Receiving a Legal Notice From His Ex-Wife

Look who is talking. Take your private life off youtube then talk. Hypocrite. Stop your cyber abuse, whole world saw your potty mouth against madam Lakshmi. No TV show friends here to conveniently edit out your expletives. You are exposing yourself, no one else is to blame.

But you see, no use talking about my private life since I have only one chapter. It will not bring any benefit to you.. Unlike some mega serial lives with season 1,2, 3...#ChallengeAccepted #BringItOn

BTW, what is this actress comment? I didn't understand. https://t.co/B1f5dqMNRO

Good riddance ! Keep blocking all other remaining good people who dare to question you, and surround urself with crap that keeps cheating you.

I actually feel sorry for you. If there is any humanity left in you, I am ready to help even now to find peace and happiness. pic.twitter.com/2gA9yKmEgQ

The series of argument between Kasturi Shankar and Vanitha Vijaykumar has only gotten ugly. The latter mentioned in her post that she is blocking Kasturi to which she responded saying, “Good riddance!  Keep blocking all other remaining good people who dare to question you.”

(The above story first appeared on LatestLY on Jul 20, 2020 03:00 PM IST. For more news and updates on politics, world, sports, entertainment and lifestyle, log on to our website latestly.com).