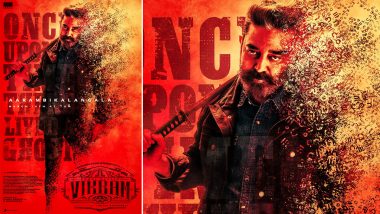 'Vikram' makers have even locked the run time for this movie, which also features Vijay Sethupathi and Fahadh Faasil in lead roles. The film will be released on June 3, while 'Vikram' will also have special premiere shows in the US on June 2. Vikram: Lokesh Kanagaraj Officially Welcomes Suriya on Board for Kamal Haasan, Vijay Sethupathi’s Film (View Pic).

(The above story first appeared on LatestLY on May 23, 2022 06:44 PM IST. For more news and updates on politics, world, sports, entertainment and lifestyle, log on to our website latestly.com).