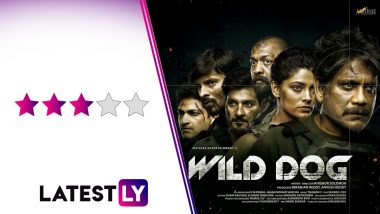 Wild Dog Movie Review: In Ashishor Solomon's debut directorial, Telugu superstar Akkineni Nagarjuna plays Vijay Varma aka Wild Dog, as his department likes to call him. An NIA officer whose no-prisoners-aboard attitude in his last mission (modelled after Batla House Encounter), sees him relegated to a desk job. But when a popular eatery in Pune is devastated by a bomb blast that kills many innocents, his senior DGP Hemanth (Atul Kulkarni) gets Vijay assigned to lead a task force to catch the mastermind behind the terrorist attack. Wild Dog Review: Nagarjuna's Performance Impresses Critics But The Movie, Not So Much!

Vijay, who had lost his own daughter in another such tragedy, is determined to capture the culprit, an elusive terrorist named Khalid Bhatkal, with the help of a dedicated team. His search leads him from Hyderabad to Pune to Mumbai to finally Nepal, where the team is joined by Arya (Saiyami Kher), a RAW agent who has the needed intel. Whether they manage to pull off the near impossible while dodging a lethargic system is what the rest of Wild Dog is about.

Wild Dog is based on the real-life capture of terrorist mastermind Yasin Bhatkal from Nepal by an NIA team. Yasin, an IM operative currently incarcerated in Tihar jail, was responsible for the series of attacks in India between 2007 and 2012, before he was captured in 2013.

Bollywood film, India's Most Wanted, directed Raj Kumar Gupta and starring Arjun Kapoor in the lead, was also inspired by this mission. While India's Most Wanted try to keep the names and events almost close to what happened in reality, Wild Dog takes a more enthralling fictional route, and it works to some extent for the Telugu film. India’s Most Wanted Movie Review: Arjun Kapoor’s Spy Drama Lacks Both the Frills and the Thrills.

It's biggest strength is in the casting of the main lead. No offense to Arjun Kapoor, but the young actor didn't bring the required energy needed to make his character over-powering. Nagarjuna, with a enviably fit physique and vigour for his age, blends seamlessly into the role of the mission leader, doing well in the action and chase sequences. Even his team, while lacking character development moments, get their moments to shine. Why, Saiyami Kher's Arya even has a entry scene that we usually see reserved for a hero. It's another thing that she gets knocked out early in the climactic fight with the villain, leaving the hero to save the day.

Wild Dog, to the best of its efforts, is a no-frills thriller that has no songs, or needless subplots, or unwarranted comedy sequences to distract from the main narrative. The lead characters feel relatable and likeable, and the director makes sure that the jingoism is reined in. This results in an arresting screenplay that only has occasional lag issues.

Those lag issues can't mostly be blamed on the familiar beats that Wild Dog steps on, that makes many of the scenes very predictable. Wild Dog also tread on certain cliches like hero's tragic backstory that don't really matter to the plot (and also wastes a pretty Dia Mirza in the process), or most of the Indian characters speaking in Telugu even when the scenes are set in Maharashtra. Strangely, that trait goes for a toss in the Nepal scenes, where nearly everyone speaks in Hindi, save for a scene where Khalid meets a corrupt politician. The whole 'rat' angle as Vijay and his team wonder who is leaking their locations doesn't really work out, because the makers try to make it suspenseful. We clearly have a inkling who is behind this beforehand itself.

I also had this feeling that the director had to compromise on the smartness of the operation and chose to play around the thrill factor. The ease with which Vijay's team gets hold of every clue regarding Khalid's whereabouts has to be digested as script convenience and nothing else.

There are a few scenes, however, that do keep you on the edge of your seats. The scene in Mumbai where Vijay's team nearly manages to catch Khalid only to lose him due to misfortune is well-done. Similar is the sequence at the Nepali politician's house, and then the nail-biting climax.

The action sequences are also decently shot, save for Arya's entry scene that becomes a bit filmy compared to the otherwise nearly-realistic fighting bits. It is the frenetic pace and the arresting quality of these scenes that makes Wild Dog watchable, aided well by S Thaman's pounding BG score.

But there is one major problem that I have to point out with Wild Dog. While I agree that it is based on a real-life operation, certain Islamophobic imagery could have been avoided. Wild Dog may act secular - one of Vijay's team member is Ali (Ali Reza), who gets a more dangerous mission aligning with his religious identity, and who is also often the first to show solidarity. But then you also have a scene of where Vijay's men apprehend one of Khalid's men, in a van whose back has a picture of a saffron Hanuman - RSS' fave picture.

Similarly provocative is the scene where Khalid teaches misconstrued Islamic teaching to kids. You might argue that this is what terrorist leaders do and I agree. But we also live in a time where minorities are already living in an atmosphere of fear and hatred, and we need to do our best to reduce Islamophobia. Let me point an example - there is a scene in a Hindi movie called Blank, where actor Jameel Khan plays a terrorist head and permeates his warped ideologies to young kids. That scene has been shared by Right Wing trolls claiming how Muslim children are being brainwashed to turn terrorists. Which is exactly why filmmakers need to be more careful when making films on terrorists.

Wild Dog doesn't disappoint as a thriller, as it benefits from its no-frills storyline and Nagarjuna's commanding performance. The movie, after releasing in theatres on April 2, is now streaming on Netflix.

(The above story first appeared on LatestLY on Apr 22, 2021 03:05 PM IST. For more news and updates on politics, world, sports, entertainment and lifestyle, log on to our website latestly.com).