Wild Dog Review: Nagarjuna's Performance Impresses Critics But The Movie, Not So Much!

Nagarjuna's Wild Dog skipped the OTT route to release at the theatres. While critics have been highly impressed by the actor's performance, they aren't too kicked about the movie. Most of the reviews have called it a movie which doesn't get inventive. 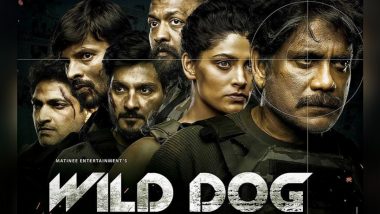 Wild Dog's trailer promised a no-holds-barred account of National Investigation Agency (NIA) officials' mission to nab Yasin Bhatkal from Nepal. He was responsible for the 2007 Hyderabad serial blasts and the 2010 Pune blast. Nagarjuna in action thriller is something his fans always dream about because the actor makes them look extremely fascinating. Wild Dog is supposed to be the same but it seems while Nagarjuna is garnering a lot of praise, the movie hasn't managed to live upto critics' expectations. We have compiled some of them discussing what stopped them from having an immersive experience of this terror-busting premise.  Brahmastra: Nagarjuna Wraps Up the Shoot of Alia Bhatt, Ranbir Kapoor’s Fantasy Adventure

The Hindu: With some more attention to the writing in the first hour, Wild Dog could have raised the bar higher. Nevertheless, the slick film is a celebration of the unsung NIA officers who made this story possible and of Nagarjuna, who shows that he can still pack a punch in action thrillers, with a mix of brawn, charm and maturity

Indian Express: Cinematically, this film is average at best. More or less it feels like a television film. Perhaps, the budget cuts and the restrictions to shoot the film during the coronavirus pandemic could be the reasons for its iffy production values. Nonetheless, the film visually fails to make an impression on the big screen. Shaneil Deo’s cinematography is a bit rough and has very little artistic value. The scenes of bomb explosions and the ensuing gunfights in the jungles look dated. It lacks the sharpness of the action sequences that we are treated to in the opening moments when Vijay and his team hunt down the terrorists in bustling streets.

123Telugu: Wild Dog is an action drama that has an interesting premise. Nagarjuna leads from the front and the second half has good thrills. But to enjoy this part, one should sit through the dull first half. This film is made for the general Telugu audience with a new setup and different action. So don’t go in with a mindset of watching a gripping OTT kind of a thriller as Wild Dog has its own pace and style.

Times Of India: Nagarjuna aces the role of Vijay Varma with élan, seeming at ease in the skin of the character. Dia Mirza gets a chance to shine despite her limited screen time. Wild Dog is a simple story that doesn’t veer much beyond the tale of a team looking to nab a terrorist. Ahishor Solomon must be lauded for attempting to make an action film that’s devoid of any commercial elements. However, he also doesn’t move beyond telling a story that lacks an emotional hook. Watch this one this weekend if action dramas are your cup of tea. Bigg Boss Telugu 4 Launches and Viewers Have the Funniest Memes and Jokes About Nagarjuna Akkineni’s Show (Read Tweets)

First Post: For Nagarjuna, Wild Dog offers a different canvas, and that he pulls off the action sequences and adrenaline-pumping moments convincingly is testimony for his zeal to do something different. Wild Dog doesn’t quite find its feet when Solomon focuses on the investigation. It’s neither smart nor inventive in terms of its storytelling or drama. But once it moves into the wilderness, it unshackles itself and finds its stride with each step. That's when the film finds its rhythm and gives us a reason to root for the characters, without being too jingoistic.

(The above story first appeared on LatestLY on Apr 03, 2021 04:51 PM IST. For more news and updates on politics, world, sports, entertainment and lifestyle, log on to our website latestly.com).