India’s Most Wanted Movie Review: Arjun Kapoor’s Spy Drama Lacks Both the Frills and the Thrills

India's Most Wanted ends up being Mission: Unbearable for the audience. 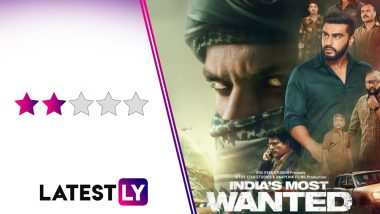 A mission to catch one of the biggest terror masterminds in India without any weapons and support? Sounds exciting? What if it happened in real life, just a few years back? India's Most Wanted is a fictional retelling of Indian's Intelligence Bureau capturing of the dreaded Yasin Bhatkal in 2013. Directed by Rajkumar Gupta who gave a hit last year in Ajay Devgn's Raid, India's Most Wanted has Arjun Kapoor in the lead as the IB officer and an unsung hero of the mission. With the likes of Baby in mind, we expect Gupta to score a whammer with this thriller. What we get is a wet cracker that spurts and fizzles its way to the conclusion.

During the period 2008 to 2013, a faceless terrorist carries out a series of bomb blasts across the country. In an explosion in Pune, the Indian Intelligence Bureau finally gets their glimpse of this 'ghost' who goes by the name Yusuf (Sudev Nair).

Prabhat (Arjun Kapoor) gets information that Yusuf could be in Nepal. With his team, consisting of four scarcely-paid (and scarcely explored) members, Prabhat asks for his senior Singh (Rajesh Sharma) permission to go to Nepal. When they don't get a green light from the higher authorities, Prabhat agrees to go on a mission off-the-records and without any weapons and support. And thus begins their quest to capture India's Osama Bin Laden, with ISI hot on their tails to bump off the whole team.

On the face of it, India's Most Wanted is a brave venture. It is a spy thriller that aims to steep itself in realistic tropes, without any needless action sequences associated with the genre. The movie doesn't hold itself calling a spade a spade (like actually accusing Pakistan's ISI of carrying out terrorist attacks in India). Although the movie does go a bit far in showing Nepal and Dubai in a bad light... Arjun Kapoor Starrer India's Most Wanted Will Not Release in Dubai for This Reason!

Like Uri: The Surgical Strike earlier this year, India's Most Wanted also takes the cover of fictionalising the events to make a real-life incident thrilling. Only that it doesn't turn out that way.

For what could be have been an exciting proposition - a deadly mission without the protection - India's Most Wanted suffers from very shoddy technical values. The editing is quite haphazard; there some very snarky jumps that don't make us follow things quite easily. Which is strange in the case of India's Most Wanted, as the movie doesn't have any unnecessary frills like a romantic subplot for the hero. In fact, Arjun's character is not even given a proper background, which makes him more of a ghost than the terrorist he has to capture.

Yet, scenes feel stretched; visuals of scenery are inserted at random places. There is a song set in a nightclub that should have no place in the movie. India's Most Wanted VS PM Narendra Modi: Will Arjun Kapoor Beat Vivek Oberoi and Race Ahead at the Box Office? Find Out!

Another irritating factor about India's Most Wanted is the background score. A usually terrific Amit Trivedi is on a complete copy-paste mode here, filling in whatever gaps he can find with musical pieces that make no sense to the mood of the scene. Rajkumar Gupta's direction also feels listless, surprisingly, bringing none of the zing into India's Most Wanted that we saw in Raid, No One Killed Jessica and Aamir.

Even the writing isn't that tight enough. For a movie that claims about five unsung heroes (which is a lie, since Prabhat's team gets more members), only Arjun Kapoor's character gets enough prominence; others feel more like fillers than actual team members. Even in the case of Prabhat, we have no clue about the guy's background. There is a running gag about him getting lewd messages from a girl that doesn't have any kind of outcome in the end.

Even the so-called 'Osama' is shown shrouded in secrecy and darkness, even though we get to see his face in the second scene itself. Also, scenes, where he carries out various terrorist attacks, are randomly inserted throughout the film and could have been avoided. They don't even adhere to the timeline the main events are set, and the villain's narration to these scenes feels annoying than menacing.

All these factors combined take the thrill out of this thriller, making it a very meandering film with a few moments, here and there.

Watch the trailer of India's Most Wanted here:

PS: Why was the Shah Rukh Khan reference needed at all in the film?  The real Yasin Bhatkal may have caused a nuisance for SRK by using his name as an alias. But this was supposed to be a fictional retelling, and it is only towards the end that we even get the idea why SRK has been mentioned. Thanks to that awful editing, the movie does more damage to the actor's clout than do him any favour!

A half-energetic Arjun Kapoor struggles to carry the film on his slunk shoulders. He may be earnest in his performance, but Arjun fails to bring the energy needed to make his IB officer role convincing enough. Rajesh Sharma is apt as Prabhat's supportive superior. Among the rest of the cast, Jeetendra Shastri and Pravin Singh Sisodia make some sort of impact.

India's Most Wanted squanders an interesting, real-life based premise with shoddy technicalities and a listless execution. For a spy thriller, the movie lacks two of the most needed ingredients to make the mission successful - energy and thrills. India's Most Wanted ends up being Mission: Unbearable for the audience.

(The above story first appeared on LatestLY on May 23, 2019 11:02 PM IST. For more news and updates on politics, world, sports, entertainment and lifestyle, log on to our website latestly.com).