Are Muslims Kids Being Trained to Make ‘Kashmir’ Out of India? Madhu Purnima Kishwar Tweets Scene From a Sunny Deol Movie As Fake News

Interestingly Sunny Deol, the star of Blank, is an MP from Bharti Janta Party (BJP), the ruling party, whose fanbase Kishwar is known to be a part of. 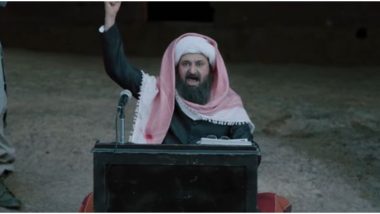 A Scene from the Movie Blank (Photo Credit: YouTube)

A few months back, Karan Kapadia, the nephew of actress Dimple Kapadia, had made his debut with the movie, Blank. The movie, also featuring Sunny Deol as a parallel lead, was a twisty affair that dealt with themes involving Islamic terrorism. While Blank flopped badly at the box office, a scene from the film went viral for all the wrong reasons a couple of months after the release of the film. Sunny Deol’s Blank Movie Scene Video Clip Circulated on Social Media to Spread Communal Hatred.

In the aforementioned scene, actor Jameel Khan, known for his role in Gangs of Wasseypur, is playing a terrorist mastermind who is seen brainwashing Muslim kids for jihad. Certain mischief mongers have been using this clip to propagate inter-religious disharmony. Among them is Madhu Purnima Kishwar, Maulana Azad National Professor and a self-proclaimed 'factarian' (so her Twitter bio says), who is often accused of tweeting malicious fake news.

The same scene is also a part of the trailer, which you can see below:

Here's what her caption translates to, "Watch this video and compare these children with our children. What kind of training are they getting right now. After that how long will our children be able to stand before them? This is happening under our noses. If the vigilance is not done, then what happened in Kashmir is going to happen here within 30 years."

Even though it is quite obvious that the clip is from a movie (Jameel is a very known face...and those camera angles), many on Twitter have been liking and retweeting Kishwar's truncated video. Madhu Kishwar Tweets 'Wait Till Rahul Gandhi Promises Free Sex For Adult Male', Gets Brutally Trolled on Twitter.

Interestingly Sunny Deol, the star of Blank, is an MP from Bharti Janta Party (BJP), the ruling party, whose fanbase Kishwar is known to be a part of.

Video Clip Showing a 'maulana' training Muslim kids on jihad is being circulated claiming Hindus are in danger.

The said video is a scene from the movie Blank, that stars Sunny Deol.

(The above story first appeared on LatestLY on Mar 11, 2020 04:45 PM IST. For more news and updates on politics, world, sports, entertainment and lifestyle, log on to our website latestly.com).