Same-sex love stories with male protagonists, although rare, have still been explored on the Hindi screen, but lesbianism is relatively rarer.There are quite a few projects that have come up spotlighting lesbian love. 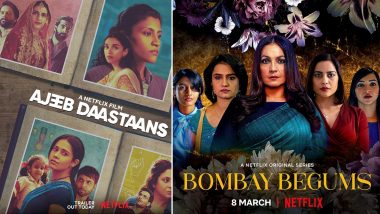 Same-sex love stories with male protagonists, although rare, have still been explored on the Hindi screen, but lesbianism is relatively rarer. The rise of OTT culture has created a platform to explore a variety of subjects. Lesbianism, a taboo word in India, is finding space, too, over the recent past. Ajeeb Daastaans Trailer Out! Karan Johar’s Upcoming Netflix Anthology Is About Bittersweet Twists and Turns of Life (Watch Video).

Moving away from formula-driven content, the digital space has been intrepid in narrating stories where a woman would express love to another woman uninhibitedly. There are quite a few projects that have come up spotlighting lesbian love. OTT Releases of the Week: Abhishek Bachchan’s The Big Bull on Disney+ Hotstar, Aadar Jain’s Hello Charlie on Amazon Prime Video, Octavia Spencer’s Thunder Force on Netflix and More.

The upcoming anthology is all about love and longing. However, one story featuring actresses Konkona Sen Sharma and Aditi Rao Hydari explores a relationship between two women. Titled Geeli Pucchi and directed by Masaan maker Neeraj Ghaywan, the story revolves around two women who long for an emotional connect and end up finding it in one another.

The show, starring Pooja Bhatt, Shahana Goswami, Amruta Subhash, Plabita Borthakur and Aadhya Anand, touches upon themes of ambition, desire, struggle for power and vulnerability through the stories of five modern Indian women in Mumbai. When it dropped, a sensual kissing scene between Plabita and co-actress Sanghmitra Hitaishi created quite a stir.

The web series is about a relationship two women develop, and the circumstances that lead to it. The show stars Monica Dogra and Ridhi Dogra, and is based on author Manju Kapur's bestseller novel of the same name.

The show isn't just about lesbian relationships but one of the lead characters, played by Bani J, is bisexual. Soon, the story shifts to Bani's character falling in love with Lisa Ray's character and the story revolves around their relationship.

(The above story first appeared on LatestLY on Apr 06, 2021 01:30 PM IST. For more news and updates on politics, world, sports, entertainment and lifestyle, log on to our website latestly.com).