Actor Rohit Suchanti, who features in the latest TV show Bhagya Lakshmi, revealed he had to get into shape" for his role by losing 7 kilos within a span of just one month! 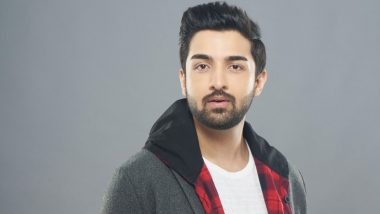 Actor Rohit Suchanti, who features in the latest TV show Bhagya Lakshmi, revealed he had to get into shape" for his role by losing 7 kilos within a span of just one month! Talking about the same, Rohit told IANS: "I was a little unfit and had to get into shape really quickly. I lost around 7 kgs in a month for the role. There is a drastic change from when I had auditioned to now when I'm playing the role." Bhagya Lakshmi: Aishwarya Khare and Rishi Oberoi’s Daily Soap To Air on Zee TV From August 3!

Sharing his weight loss journey, the actor said: "I worked out for almost three hours daily. In the early morning, I did cardio exercises like cycling or running. In the afternoon or evening, I did weight training, which helped me lose all the extra pounds I was carrying. Also, I went on a very strict high protein diet and intermittent fasting for 16 hours, which helped." Indian Pro Music League: Bobby Deol, Riteish and Genelia Deshmukh to Perform on Zee TV’s Music Reality Show.

Rohit plays the role of a young industrialist named Rishi Oberoi in 'Bhagya Lakshmi'. Opening up on the similarities that he shares with his on-screen character, the actor said: "My character is that of a rich industrialist. He is very driven in life and loves his work. I'm also a motivated person and can relate to this character. When it comes to work, I give my 100 per cent. I also don't believe in fate, I can write my own fate with hard work I believe. It feels nice to play something which you actually are in real life!"

Youngsters are drifting away from television towards OTT platforms. Can his new show pull this crowd back to TV? "A lot of people, even some of my friends say 'oh we watch only OTT platforms'. Once I went to a friend's house, he was actually watching an Indian daily soap on TV. When I directly asked him the reason, he said, there's something interesting happening on the show!" Rohit said.

"I feel a lot of people still watch daily soaps who do not have access to OTT subscription, so their only option is to watch TV," he added. Talking about his latest soap 'Bhagya Lakshmi', Rohit further said: "The show has a nice concept. I really hope people watch and like it." Also starring Aishwarya Khare in the lead, 'Bhagya Lakshmi' airs on Zee TV.

(The above story first appeared on LatestLY on Aug 04, 2021 02:43 PM IST. For more news and updates on politics, world, sports, entertainment and lifestyle, log on to our website latestly.com).