Bigg Boss 14: Contestants of Salman Khan’s Show to Be Quarantined Before Getting Locked Inside the Controversial House? (Read Details)

Salman Khan hosted reality show Bigg Boss 14 or should we say Bigg Boss 2020 is soon to get aired on TV. Reports are that the controversial reality series will premiere from September 20, 2020. Read on. 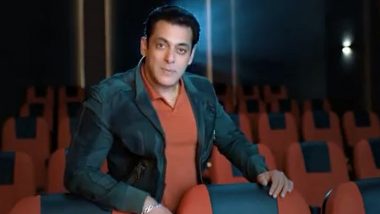 Salman Khan hosted reality show Bigg Boss 14 or Bigg Boss 2020 is soon to get aired on TV. Reports are that the controversial reality series will premiere from September 20, 2020, on Colors. However, there has been no official confirmation about the same by the makers yet. Salman has already begun shooting for the promos as he was some days back spotted at Mumbai's Mehboob Studios. That's not it, two promos of the show are already out which has gotten fans excited. However, all that being said, now an exclusive report in Spotboye suggests that the contestants will practise 14 days quarantine before entering the show. Bigg Boss 14 New PROMO: Salman Khan Talks About Manoranjan in 2020, Says ‘Ab Scene Paltega’ and We Can’t Help but Wonder if This Is the New Tagline (Watch Video).

"Endemol has informed the participating contestants about the idea already that before stepping in, they have to stay under isolation provided by the makers and after the test results are negative, they will be sent in." the report on the portal reads. Bigg Boss 14: Pavitra Punia Quits Baalveer Returns to Be a Part of Salman Khan’s Controversial Reality Show?

As we all know that this year the theme of the reality show is lockdown and so the house is said to be divided into a red and green zone. This really sounds interesting and we cannot wait for the show to kickstart soon!  Bigg Boss 14: Jennifer Winget Approached for Salman Khan's Show? Actress Reportedly Offered Rs 3 Crore For the Entire Season? (View Tweet).

Many names from the showbiz have been making headlines each day who would likely be seen on the show. Pavitra Punia, Jennifer Winget, Karan Kundrra, Nia Sharma, Vivian D'Sena, Surbhi Jyoti, Jasmin Bhasin, Mansi Srivastava, Sakshi Chopra are a few names approached for the show. Stay tuned!

(The above story first appeared on LatestLY on Aug 17, 2020 10:12 PM IST. For more news and updates on politics, world, sports, entertainment and lifestyle, log on to our website latestly.com).