Bigg Boss 14 Promo: Arshi Khan Tears Up As Eijaz Khan Is Asked to Leave the Show Suddenly, Devoleena Bhattacharjee Enters the House As His Proxy

It is being said that Eijaz had signed a film project before he had entered the BB house. The schedule was shifted due to the lockdown but now since the film is back on track, the producers want him back. 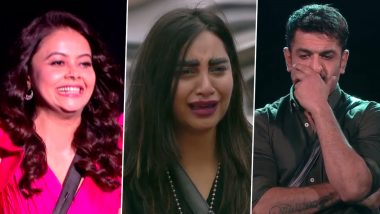 Bigg Boss 14 gets interesting day by day because of the new plots and twists that the makers add to the reality show. Speculations around one of the favourite house members, Eijaz Khan, leaving the BB house midway were making rounds for some time and now the makers confirmed the news by sharing a quick promo today. The promo showed Bigg Boss asking the actor to leave the house. A glimpse of Devoleena Bhattacharjee entering the house is also shown in the promo. Bigg Boss 14: Eijaz Khan Reveals He Has A Crush On Tabu, Wants To Marry Her.

The promo video shows Eijaz is seen standing alone in a dark room as the other housemates are gathered in the living area. Bigg Boss announces, "Eijaz Khan is ghar me aane wale pehle insaan bane is season me, aur 106 din bitae yaha. Lekin ab ye show yahi pe chor ke jana pad raha hai (Eijaz Khan became the first person to enter the house this season and has spent 106 days here. But he needs to leave the show mid-way)." Hearing this, all the housemates go into a shock mode. Arshi feels the most dejected as she starts crying for him.

It is being said that Eijaz had signed a film project before he had entered the BB house. The schedule was shifted due to the lockdown but now since the film is back on track, the producers did not want to wait for Eijaz's exit from the reality show to kickstart the shoot. The makers hence had to decide to send Eijaz and complete his prior commitments. It is being said that Devoleena Bhattacharjee will be entering the BB house as his proxy. Earlier, Eijaz ladylove Pavitra Punia was asked to fill in as his proxy but because the actress had begun her shoot for her show, she had to refuse the offer. Eijaz Khan In Bigg Boss 14: Career, Love Story, Controversies – Check Profile of BB14 Contestant on Salman Khan’s Reality TV Show.

Another promo showed several men entering the house and taking away all the ration from the house. Bigg Boss announces, "Aaj se sara ration, Bigg Boss apne kabze me kar rahe hain (Bigg Boss will keep all the ration in his custody now)." The men take away food items that contestants had hidden away in their bed closets, suitcases, bags in the luggage room. This step comes as a punishment for the contestants for not taking the tasks seriously. Rubina Dalaik even goes on to blame Eijaz for this punishment.

(The above story first appeared on LatestLY on Jan 18, 2021 03:04 PM IST. For more news and updates on politics, world, sports, entertainment and lifestyle, log on to our website latestly.com).