Bigg Boss 14: Rakhi Sawant Reveals That Husband Ritesh’s Bank Balance Was the Reason She Married Him

It was pretty obvious when journalists came inside the house for the press conference during yesterday's episode that they asked Rakhi about her husband. She was bombarded with questions about her marriage. 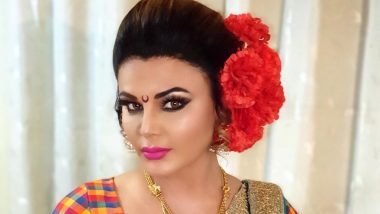 Rakhi Sawant is entertaining everyone with her performance inside the Bigg Boss 14 house. She often talks about random things with fellow housemates and gives the audience a reason to laugh. Out of the many topics that Rakhi has a discussion on is her marriage to Ritesh. The legitimacy of her marriage is one of the biggest questions her fans have. No one has ever seen Ritesh and people wonder if he even exists. However, Rakhi has openly talked about her relationship with him and even told the housemates that she has requested him to make an appearance in the Bigg Boss house. Bigg Boss 14: Rakhi Sawant’s Husband Ritesh Blasts Nikki Tamboli-Manu Punjabi for Talking Ill About His Wife’s Career and Stature.

It was pretty obvious when journalists came inside the house for the press conference during yesterday's episode that they asked Rakhi about her husband. She was bombarded with questions about her marriage when Rakhi revealed that she married Ritesh in urgency and did not even meet him or spoke to him before getting married. She said that her sole purpose of saying yes to Ritesh was his bank balance.

During the episode, Rakhi said, " People urgently go shopping, they break-up on urgent basis and I was in a situation where I had to get married urgently. There is a famous and influential person in India, whose name I cannot take, and if I had not gotten married, that person would have abducted me. He had even threatened me and I did not file a police complaint about it. I had not seen Ritesh, had not even spoken to him, I just saw his bank balance and said yes." Bigg Boss 14’s Rakhi Sawant Begged Husband Ritesh to Reveal His Identity, Says He Agreed to Do It Before They Have Babies.

Backing her daughter and confirming that her marriage is legit, Rakhi's mother had earlier told ETimes TV, "Rakhi’s husband Ritesh is taking care of me and all the medical bills and everything. He is there for us. He is trying hard to come to India and I have asked him to come ahead and reveal his identity. He has assured me that he will come before the audience and accept Rakhi as his wife. He is a very good human being, and I just want them to be together and happy in their married life."

We have often seen Rakhi cry for Ritesh on the reality show. She was once even seen telling her fellow contestants how she always begs her NRI husband to reveal his identity. She said that people feel that she is faking it and have asked her husband to make an appearance and prove them wrong. She added that Ritesh is very shy and nervous of revealing his identity and has asked Rakhi for some time. He even said that he will reveal himself once Rakhi is pregnant with their baby.

(The above story first appeared on LatestLY on Jan 24, 2021 05:47 PM IST. For more news and updates on politics, world, sports, entertainment and lifestyle, log on to our website latestly.com).