Rakhi Sawant's entry on Bigg Boss 14 has surely spiced up things. Now, in a recent interview, Rakhi's husband Ritesh has slammed Nikki Tamboli and Manu Punjabi for their ill comment on his wife's career as well as stature. Read on. 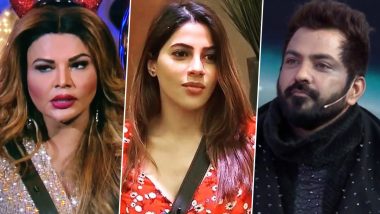 Rakhi Sawant is indeed making noise on the controversial reality show Bigg Boss 14. Infact, it is after her entry that the show is getting a bit entertaining. Now, in a recent interview, Rakhi's husband Ritesh has slammed Nikki Tamboli and Manu Punjabi for their ill comment on his wife. In one of the recent episodes, we saw Rakhi alleging that there is something going on between Manu and Nikki. Her exact words for Nikki were, "Mardo ko kone mein lekar baithti hai chugalkhor." To which, Manu-Nikki hit back at Sawant by commenting on her career. Bigg Boss 14 Weekend Ka Vaar December 20 Episode: Rubina Dilaik Calls Jasmin Bhasin a Witch; Kashmera Shah Evicted – 6 Highlights of BB 14!

Speaking exclusively to SpotboyE, Ritesh slammed Nikki for taking a dig at Rakhi's 15-year long career and said, "Nikki who has just done three south films and had started her career in 2019 is questioning Rakhi’s experience. I feel she should just go and read her Wikipedia and she herself will come to know what her achievements are. Rakhi is not just popular here but all over the world." Bigg Boss 14 Preview: Rahul Vaidya Tags Rubina Dilaik as Authoritative; Vikas Gupta Re-Enters (Watch Video).

Here's The Glimpse Of The Incident:

He also blasted at Manu and added, "That Manu Punjabi is asking ‘Rakhi, teri aukaat kya hai? (what is your stature).’ Main poochta hoon uski apni aukaat kya hai (I want to ask what his own stature is)? His turnover is just 1.3 million USD whereas I am 6 billion owner and she is married to me. There is no comparison only. Kisi bhi insaan ki aukaat uske paise se nahi uske behaviour se hoti hai (The stature of a person is not determined by a person’s wealth but their behaviour) and they should understand that.”

During the duck task, when Rakhi had abused Nikki, she instantly apologised to her for speaking ill. Ritesh also talked about it and added, "Rakhi already apologised for the abusive language she used during the duck task which has irked Nikki so much so that the very same moment Rakhi even touched her feet." Stay tuned!

(The above story first appeared on LatestLY on Dec 21, 2020 04:18 PM IST. For more news and updates on politics, world, sports, entertainment and lifestyle, log on to our website latestly.com).