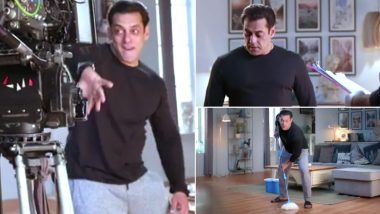 The new season of Bigg Boss is on its way. In the 14th season, the show will include some changes to the concept - as per reports, some old contestants will return as guests along with the new participants. "Ab scene paltega" is the tagline of the show. The promos of the show have begun airing hinting at the same. And now, we have our hands on a BTS footage of the promo shoot. In the video, Salman can be seen cleaning the floors of a room - singing chirpily and happily whistling. In the footage you can see how everyone on the set is maintaining social distancing norms and wearing masks. Bigg Boss 14 House Photos Leaked? Here Is a Tour of the New Residence for the Contestants [View Pics Inside].

Bigg Boss 14 will start streaming from October 3. A few promos have featured ex-contestants like Gauahar Khan, Sidharth Shukla, and Hina Khan. Pavitra Punia, Nishant Singh Malkani, Indeep Bakshi, Jasmi Bhasin, Karan Patel - are rumoured to be joining the new season as contestants. Aly Goni, Neha Sharma, Ajay Nager have clarified that they are not doing the show. We are super excited to see who will be the celebrities coming on board this season on October 3. Also, it will be tough to pull off a show amid a pandemic. Bigg Boss 14: Hina Khan Says She Was the Winner Without the Trophy in New Promo of Salman Khan's Show (Watch Video).

On the filmy front, Salman will be next seen in Radhe. The movie was supposed to release on Eid earlier but due to the pandemic, a week worth of shooting got delayed.

(The above story first appeared on LatestLY on Sep 22, 2020 09:16 AM IST. For more news and updates on politics, world, sports, entertainment and lifestyle, log on to our website latestly.com).