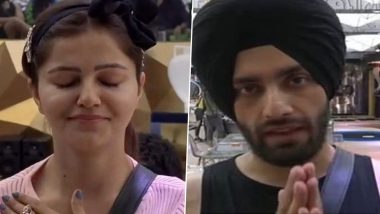 The LGBTQ+ community in India is misunderstood on a very large extent. While slowly and steadily, acceptance is surely coming in but is it enough? As still many do not understand the basic difference between a crossdresses, hijra, gay etc. Coming to the point, on October 14 episode of Bigg Boss 14 we saw something which literally made us proud. And the credit for this surely goes to Rubina Dilaik. It had so happened that during the farmland task Nishant Singh Malkhani and Shehzad Deol get into an ugly exchange of words where the latter calls the former as 'Chakka'. [EXCLUSIVE] Bigg Boss 14: Rubina Dilaik Is Confident of Her BB Journey, Says ‘It’ll Be a Legacy That Will Be Left Behind’.

FYI, Chakka or Hijra are not cuss words and should not be used in that context. And well, Rubina echoed our emotions by bursting like a Diwali cracker and making Deol and Malkhani understand that Chakka ain't an abusive word. That's not it, as she also made Shehzad apologise on national TV to the transgender community. Kudos to her. As soon as this incident happened, netizens hailed Rubina for taking a stand against the LGBTQ+ peeps. Check out a few Twitter reactions below: Bigg Boss: On Salman Khan's Reality Show, Homophobia Is a Clear Winner.

Since I belong to LGBT community. I want to thanks #RubinaDiliak for taking brawny stand for our community. I know pain of being called Hinjra Chakka as abuse. I'm really thankful to people like her fighting for our rights. The day will come, where we will be treated equally 🌈

Rubina saying that hijda n chakka is not a gaali and making Shehzad apologize to their community for using it like that👏🏼 She also did a show for empowering them. Hats off👏🏼#RubinaDilaik #BB14

Rubina's firm stand against the word "chakka" and "hijda" being used as a gaali or something derogatory by Shehzad and Nishant was fabulous.

She made Shehzad apologize for it too.

Without saying anything shehzad sayed camera on sry

For the unaware, Rubina has played a trans person in her show Shanti — Astitva Ke Ehsaas Ki. The TV actress so far on Bigg Boss is coming out as quite a strong-headed woman who has her own opinion (good or bad). Well, this is just the start and we are sure, Dilaik will not disappoint. Stay tuned!

(The above story first appeared on LatestLY on Oct 15, 2020 04:50 PM IST. For more news and updates on politics, world, sports, entertainment and lifestyle, log on to our website latestly.com).