TV actor Eijaz Khan's past life to be a point of discusson on tonight's episode of Weekend Ka Vaar with Salman Khan on Bigg Boss 14. Check it out. 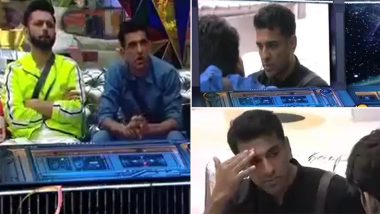 Bigg Boss 14 is doing extremely well. As going by the first week, every contestant has their own spark which is right for the show. October 10 marks the first-ever Weekend Ka Vaar and going by the glimpse of the same, it does look entertaining. Keeping all the things aside, let us talk about the viral promo released by the makers where we see Eijaz Khan a bit worried. FYI, something huge from the actor's past life is going to be exposed tonight. In the clip, we see Eijaz discussing the same with mentor Sidharth Shukla. Bigg Boss 14 Weekend Ka Vaar Preview: Salman Khan Compares Abhinav Shukla To Bigg Boss 13 Winner Sidharth Shukla (Watch Promo Video).

In the conversation, we see Eijaz telling to Sid that his past love life was huge chaos. Later on, we even see Salman Khan explaining to the actor that if he goes wrong, he will also look wrong on the show. To which Eijaz replies saying that his past is the only thing which makes him feel awkward all the time. Well, after watching this even we are curious to know, what's the raaz. Bigg Boss 14 October 9 Episode: Sidharth Says Gauahar Has No Work - 5 Highlights of day 6 of BB14.

For the unaware, earlier Eijaz Khan on an old chat show had spilt the beans that he had cheated on one of his ex-girlfriends. During that time the actor was rumoured to be dating his Kkavyanjali co-star Anita Hassanandani. Let's wait for Weekend Ka Vaar and see what exactly pops out. Stay tuned!

(The above story first appeared on LatestLY on Oct 10, 2020 04:44 PM IST. For more news and updates on politics, world, sports, entertainment and lifestyle, log on to our website latestly.com).