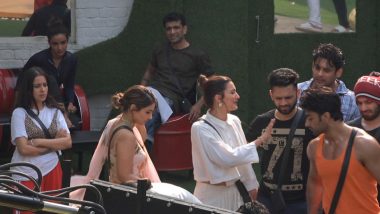 In the last episode of Bigg Boss 14, Rubina Dilaik has finally entered the house. She had to give up an opportunity to win immunity for this. Her entry in the house won't be without trouble. On the October 9 episode of Bigg Boss 14, Rubina got into a verbal argument with all the seniors, Hina Khan, Gauahar Khan and Sidharth Shukla. Nishant Singh Malkhani is also seen more on the new episode. A new immunity task turned the house upside down, especially for Nikki and Abhinav. Bigg Boss 14 October 8 Episode: From Nikki Tamboli Winning Immunity to Gauahar, Sidharth Complaining About Rubina, 5 Highlights of Day 5 From BB14.

Sidharth Says Gauhara Did Not Get Work

Gauahar asks Sidharth if he was always a bully or if he became one after Bigg Boss 13. Sidharth says that he was bullied. Gauahar does not believe it. Sidharth says he is not double-faced like Gauahar. He jokingly tells her that she did not get any work after season 7, so Bigg Boss called her back.

Sidharth playfully slaps Hina. Hina becomes adamant that she will also slap him. After a lot of tiffs, she is able to slap Hina. "You don't know who you have messed with," she said to Sid.

Rubina says that salwar-kameez should be counted as one item. Contestants argue and tell her that they've already debated about it and that can't be done.

Rubina reads the instructions again. She says that a pair of shoes will also be counted as two separate items. Hina gets agitated and tells her that she will only get one shoe. Abhinav tries to put sense into Rubina.

Yet another immunity task takes place. Contestants, except for Rubina, have the chance to snatch Abhinav and Nikki's from them for themselves.

Contestants have to remove Abhinav and Nikki from the scooper of a machine. Nishant sprays something on Abhinav. He also puts red chilli powder on him. Rubina feels bad. He tries to put toilet cleaner on him but is stopped by others. Rahul puts shaving cream on Nikki.

(The above story first appeared on LatestLY on Oct 10, 2020 03:33 AM IST. For more news and updates on politics, world, sports, entertainment and lifestyle, log on to our website latestly.com).