After the task's first round, Devoleena declares that no non-VIP can participate in the next game due to their poor performance, taking away their chance of winning the money. 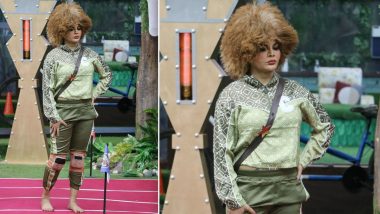 As the coming episode will see contestants engaging in the Ticket To Finale task inside the Bigg Boss 15 house, the non-VIPs have an opportunity to win the prize money and the 'Sanchalaks' are the VIPs themselves. After the task's first round, Devoleena declares that no non-VIP can participate in the next game due to their poor performance, taking away their chance of winning the money. Bigg Boss Telugu 5: Anticipation Rises Among Viewers for Upcoming Nominations After Priyanka Singh’s Exit From the Show.

On this Nishant gets furious and says: "Have you all gone crazy and you all are taking a foolish decision?" Pratik tells Rakhi to do the right thing without getting influenced by others. Karan says: "If this round gets cancelled, then this task won't be performed. Go to hell!" Now, there will be several rounds to reach the Ticket To Finale. As per sources and reports on social media, Tejasswi Prakash can win the first round, Umar Riaz has chances of winning round 2. Bigg Boss 15: Non-VIP Contestants Blame Each Other to Escape Nomination on Salman Khan’s Show.

If by chance Rakhi Sawant gets out in the 3rd round, then Pratik Sehajpal, Nishant Bhat and Shamita Shetty will support Devoleena. And if Rashami Desai is out in 3rd round then Rakhi Sawant will win Ticket To Finale. But nothing has been confirmed officially.

(The above story first appeared on LatestLY on Dec 07, 2021 09:02 PM IST. For more news and updates on politics, world, sports, entertainment and lifestyle, log on to our website latestly.com).