Bigg Boss 16 host Salman Khan has often been seen guiding Priyanka Chahar Choudhary for her game in the show and has even taunted her for her behaviour. 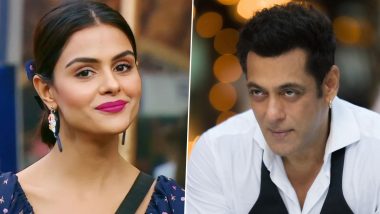 Superstar Salman Khan in the Weekend Ka Vaar episode has hinted that he may launch Bigg Boss 16 contestant Priyanka Chahar Choudhary in Bollywood. In the past, Salman has often been seen guiding Priyanka for her game in the show and has even taunted her for her behaviour. He had even once said that if she doesn't change her attitude, then she won't be getting any work. Bigg Boss 16: Salman Khan Expresses Desire to Work With Priyanka Chahar Choudhary in Future.

However, fate has different plans for Priyanka as in the latest episode of the controversial reality show, Salman was seen telling Priyanka to meet him after Bigg Boss 16 as as he has "something for her". In the same episode, Archana Gautam and Priyanka were seen talking about Salman's statement. Where Archana said the superstar meant that a "film" awaits her.

In Saturday's episode, Salman was seen speaking to former contestant Sajid Khan that he would want to work with Priyanka in the future, and he has plans to cast her in his movie.

(The above story first appeared on LatestLY on Jan 23, 2023 04:32 PM IST. For more news and updates on politics, world, sports, entertainment and lifestyle, log on to our website latestly.com).