Charu Asopa and Rajeev Sen had tied the knot in a grand affair in June 2019. The lovely couple had gotten married in Goa as per Rajasthani as well as Bengali rituals. 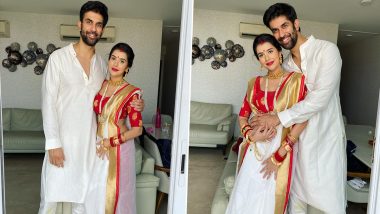 Television actress Charu Asopa and Sushmita Sen’s brother Rajeev Sen had tied the knot in a grand affair in June 2019. The lovely couple had gotten married in Goa as per Rajasthani as well as Bengali rituals. Then months later after their marriage until a few months ago, rumours started doing rounds citing that all is not well between Charu and Rajeev. It was just a month ago since the two reunited and since their relationship has been going strong. Charu has been posting some lovely PDA moments on Instagram and the latest one is from Durga Ashtami celebration. Charu Asopa Reacts to Rumours of Troubled Marriage With Rajeev Sen, Says ‘Waiting for God’s Directions’.

Durga Ashtami, that is also known as Maha Ashtami, is one of the most auspicious days of the five days long Durga Puja Festival. There are numerous rituals and prayers that are observed on these days and among them is also fasting. The eighth day of Navratri celebrations is known as Durga Ashtami and the lovely couple, Charu Asopa and Rajeev Sen, seem to be celebrating it with great zeal. Rajeev’s wife Charu is seen dressed in a traditional Bengali avatar and the former is seen sporting an all-white kurta pajama. If you haven’t seen the pics yet, take a look at them below: Charu Asopa and Rajeev Sen Resolve Their Grievances, Accept Their Past Behaviour Was Childish.

While sharing the pictures, Charu Asopa extended heartfelt greetings to everyone on the auspicious occasion. She captioned it as, “Happy Durga Saptami and ashtami to everyone.”

(The above story first appeared on LatestLY on Oct 24, 2020 09:19 AM IST. For more news and updates on politics, world, sports, entertainment and lifestyle, log on to our website latestly.com).