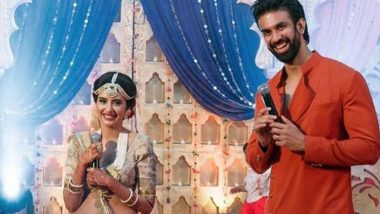 Television couple Rajeev Seen and Charu Asopa have been under the radar from the quite some time now. Rumours of all things not well between the couple have been one of the most discussed topics online. It was sometime back when the lovebirds had unfollowed each other on social media, but later on, even teased fans with moments from their video chat. In a nutshell, their on and off romance is making one and all wonder what's cooking. Now, recently in an interview with Spotboye, Charu opened about her relationship status with Rajeev. Charu Asopa's Latest Instagram Post Re-Ignites Rumours of Troublesome Marriage With Husband Rajeev Sen (View Post).

She addressed the reports and said, "Everybody knows this, Rajeev is in Delhi and I am staying here in Mumbai alone. Beyond this I am also asking God, ‘ab aage kya (what next)?’ I am also waiting for God’s directions." When further quizzed if the couple has not decided anything on this yet, she replied, "Yes, you can say that."

Earlier in an interview with TOI, Rajeev had said that someone is 'brainwashing' Charu. To which Asopa had answered to the same portal stating, "No one is brainwashing me. I am mature enough to make my own decisions — something that I have always done. Main hamesha se apne decisions khud leti aayi hoon. Maybe, he was brainwashed into deleting our pictures from his social media handles.” Have Rajeev Sen and Charu Asopa Buried Their Differences? Sushmita Sen's Brother Shares Photos With Wife From Their Sangeet Ceremony!

Rajeev and Charu tied the knot on June 7, 2019, in Goa after dating for four months. Meanwhile, Rajeev is all set to make his Bollywood debut with murder mystery Iti, which will be directed by Vishal Mishra. Stay tuned!

(The above story first appeared on LatestLY on Aug 14, 2020 08:43 AM IST. For more news and updates on politics, world, sports, entertainment and lifestyle, log on to our website latestly.com).