Ellen DeGeneres Opens Up About Ending Her Talk Show in 2022, Says 'Always Knew 19 Would Be My Last'

Ellen DeGeneres announced that her much-loved chat show is coming to an end, the star told her virtual studio audience that she has long planned to wrap her show after completing 19 seasons. 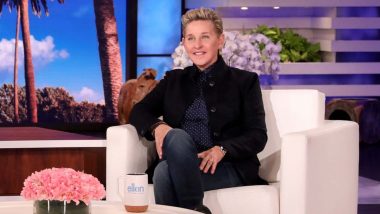 After American comedian and talk show host Ellen DeGeneres announced that her much-loved chat show is coming to an end, the star told her virtual studio audience that she has long planned to wrap her show after completing 19 seasons. According to Variety, in 'The Ellen DeGeneres Show' episode set to air Thursday, the host in her opening remarks acknowledges the news about her decision to call it a wrap after the 2021-22 season. She began her Emmy-winning run in the daytime in 2003. Ellen DeGeneres Announces Her Talk Show Will End in 2022 After Running for 19 Years.

"Two years ago. I signed a three-year deal. I always knew in my heart that (season) 19 would be my last. Nineteen is a great number," she said. As she made the final decision about her Telepictures Prods. series and spoke about her reasoning, DeGeneres' voice broke a few times. She thanked viewers for supporting the show that transformed her life and made her a bonafide superstar. "The past 18 years has changed my life -- you all have changed my life. I'm forever grateful to all of you for watching, for laughing, for dancing, sometimes crying. This show has been the greatest experience of my life and I owe it all to you," she said. The Ellen DeGeneres Show Executive Producer Rubbishes Rumours of the Talk Show Getting Shut As Workplace Investigation Continues.

As reported by Variety, the 63-year-old talk show host likened the upcoming passage for her to an earlier chapter of her career that was also momentous, when she came out as a lesbian on her 1990s ABC sitcom 'Ellen' and on the cover of Time magazine. "In 1997 I knew it was time to come out on my sitcom and live my truth. Back then I had a vivid dream that a bird flew out of a cage and set itself free because it needed to get out of the cage. Recently I had a dream that a beautiful bird with bright red feathers whispered to me 'You can still do stuff on Netflix.' And that was the sign I was looking for," stated DeGeneres.

In recent years, the 'Mr Wrong' actor's talk show has been facing rating declines. She has also taken hits to her reputation for preaching "be kind" to her audience after allegations surfaced last year about inappropriate behaviour on the set of her show. Per Variety, some of the show's crew members were "furious" with the show and the host over last spring amid the COVID-19 lockdown. They were unhappy with the uncertainty about whether they would be paid while the show was produced remotely from DeGeneres' home.

As DeGeneres noted herself, it's long been expected that she would wrap up her run sooner rather than later. The comedian hinted earlier that she will star in another comedy special for Netflix. In 2018, she fronted 'Ellen DeGeneres: Relatable' for the streamer, which marked her first standup special in 15 years and brought her a USD 20 million paycheck. Based at Warner Bros., DeGeneres' A Very Good Production banner has also become a prolific producer of unscripted series, including NBC's 'Ellen's Game of Games,' which she has hosted since 2017.