Game of Thrones cast, including Kit Harington, Lena Headey, Emilia Clarke, Peter Dinklage, Sophie Turner and Maisie Williams, got on the stage at the 2019 Emmy Awards to say goodbye, and received a standing ovation from the crowd here. 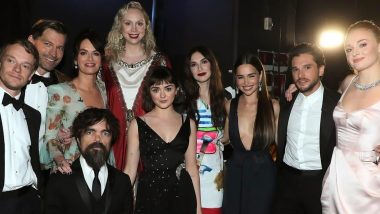 Game of Thrones cast, including Kit Harington, Lena Headey, Emilia Clarke, Peter Dinklage, Sophie Turner and Maisie Williams, got on the stage at the 2019 Emmy Awards to say goodbye, and received a standing ovation from the crowd here. Harington, Headey, Alfie Allen, Gwendoline Christie, Clarke, Dinklage, Turner, Williams, Carice van Houten, and Nikolaj Coster-Waldau, all took the stage at the Microsoft Theater here to present the Best Supporting Actress in a Limited Series award, and bid farewell. They gave the award to Patricia Arquette. Emmys 2019: Peter Dinklage Sets a Record by Bagging his Fourth Best Supporting Drama Actor Trophy for Game of Thrones.

"I think all of us agree how amazing the entire last season was for us. We had no idea how it would end, who would betray whom, and who would end up for the prize," said Turner. "As much was we wish the show could have gone on forever. Our time had come. And tonight is a chance to once again thank all of those who watched," Williams added. The cast was introduced by popular late-night host Seth Meyers, who joked that the fantasy series was about many things, such as: "No matter the amount of wedding planning you do something invariably goes wrong, and how before 23 and Me people had to rely on word of mouth to find out they slept with their aunt." Emmys 2019: Game Of Thrones Bags Best Drama Series, Twitterati Call it a Deserving Win for the Cast But Not the Makers.

GOT Cast bids goodbye, crowd greets them with a standing ovation

Game Of Thrones, which wrapped up its story with the final season earlier this year, set a new record by earning 32 nominations for the 2019 Emmys, the most ever for a single season of a show. The fantasy HBO epic leads the field of Emmy nominees, including Outstanding Drama Series, Harington in competition for the Best Actor trophy, Clarke in run for the Best Actress, four Best Supporting Actress nods -- Christie, Headey, Turner and Williams and actors Allen, Coster-Waldau and Dinklage being contenders in the Best Supporting Actor category. Created by David Benioff and Dan Weiss, the show was based on George R.R. Martin's books, and premiered in 2011.

(The above story first appeared on LatestLY on Sep 23, 2019 12:06 PM IST. For more news and updates on politics, world, sports, entertainment and lifestyle, log on to our website latestly.com).