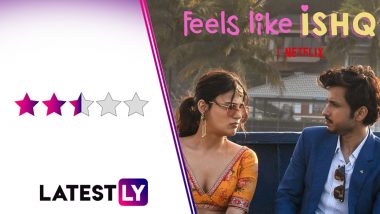 Feels Like Ishq Review: Netflix India's love for anthologies continues, with this week serving us another one in Feels Like Ishq. The series brings together six different tales of vibrant love, infatuation and attraction, each made by a different creative team and featuring a lively, talented bunch of actors, who BTW are easily the best part of their segments. Feels Like Ishq is pretty light in its tone, even if a couple of segments deal with panic attacks, breakups and activism. Let's look at each segment separately. Feels Like Ishq Review: Refreshing Love Tale but Lacks the Punch, Say Critics.

The first to come is Save the Da(y)te, directed by Ruchir Arun and written by Monisha Thyagrajan. Avni (Radhika Madan), an Insta-obsessed influencer, is serving as a bridesmaid for her bestie who runs away on the wedding day after developing cold feet. Instead of telling her family, like any sensible person would have done, or at least call her boyfriend/fiancee, Avni decides to seek the bride out by herself and she gets a reluctant partner for her mission in Jay (Amol Parashar), who happens to be the wedding planner.

Soon, the search for the bride becomes a very artificial conversation on the pros and cons of marriage as an institution. Avni, who gets irritating by the minute, is all for it, and Jay (quite paradoxically to what he works for) is not too enthu about. Their tok-jhok may be Jab We Met kinda cute, but their banter doesn't really register an impact, more so because I was thinking why are they talking frivolity when finding the bride seems the utmost important thing to do. Altogether, a very weak segment that works only for the actors.

Quaranteen is the second episode, that is directed by Tahira Kashyap Khurrana and is written by Gazal Dhaliwal. I do have a soft corner for this one, and to think of it, this could be my most fave part of the series. Both the setting and the story are quite familiar and relatable. Quaranteen is set during the first wave of COVID-19, where a teenage Sikh boy Maninder (Mihir Ahuja) living in Chandni sees his dreams of participating in a singing reality contest in Mumbai dashes due to sudden imposition of lockdown.

However, he sings a different tune when Nimmi (Kajol Chugh), a teenage girl from Canada comes to the house next door to quarantine herself. To catch her attention, Maninder begins to message her from his mother's cell and then bring her the dishes that his mother made, of course, without mommy dearest knowing. They bond over music and food before Maninder realises there is something terribly wrong in his wooing of her.

The segment is quite breezy and likeable, and both the lead actors are adorable in their roles. Quaranteen acknowledges Maninder's approach as flawed and even he understands it, but at that age, that has been a mistake that many of us had made. Maninder can take solace in the fact that he isn't as creepy as the protagonist of The Girl Next Door, while getting a chance to redeem himself in the end. The episode is also pretty funny and has a nice song too. Ray Review: Manoj Bajpayee, Harsh Varrdhan Kapoor's Netflix Anthology Gives a Kickass Tribute to The Great Master Storyteller.

The third episode is Star Host, that is directed by Anand Tiwari and is written by Saurabh George Swamy. Aditya (Rohit Saraf) rents his house in Mahabaleshwar as an Airbnb, and the first guest who arrives there is Tara (Simran Jehani), who was supposed to come with her boyfriend, but makes this a solo trip. Having lead a protected existence thanks to her phobias, this trip is her facing life without any support and Aditya, in trying to help her out, gets attracted to her.

Star Host could come across as a heartwarming story of attraction, about two strangers trying to iron out the flaws in each other, Slightly inspired by Zindagi Na Milegi Dobara, Star Host comes across as superficial at times (an adjective I like to use for other segments in this series) and is easily forgettable among the lot. However, there are some beautiful frames capturing the tranquille of Mahabaleshwar that might seduce the wanderluster in you.

What I absolutely loved about the segment is how it portrays the queer attraction without making a statement out of it, like any other meet-cute story. Just like Kashyap's episode, only more quirky and peppery. The fourth-wall breaking is annoying at times, but Sanjeeta Bhattacharya's spirited performance more than makes up for it. The episode also has my most fave moment in the series, when Muskaan helps Tarasha through a panic attack she has, as the sequence talks about emotional and mental abuse that isn't just restricted to heterosexual dynamics.

The fifth episode is The Interview, directed by Sachin Kundalkar and written by Aarti Rawal. Two youngsters meet at an interview happening in an electronics appliance showroom, and form a bond, despite being competitors. Rajeev (Neeraj Madhav) is from Kerala who is desperate to get a job to prove to his father back home, but his broken, accented Hindi and inexperience is a deterrent.

Shahana (Zayn Marie Khan) is a Muslim girl, who sways in with a lot more confidence and poise, and takes a liking for Rajeev in the way he plays with the strap of his watch when he is nervous. Something that has to do with her past. This episode is the only one that features leads who don't belong to the upper-middle class section, and benefits from that, as it touches around the subject of job desperation and raising living standards.

The best thing about the segment is the wonderful chemistry between Neeraj and Zayn, whose performances rock. Zayn, especially, uses the role to display her panache after a less-than-impressive showing in 2019's Mrs Serial Killer and does a great job at that. After wowing the Hindi audience with The Family Man's Moosa, Neeraj continues carrying forwards the flag of Malayalam cinema's strong showing even on Netflix with an endearing performance.

Though I do have certain issues here. One, why would Rajeev come for a sales-boy job in Mumbai when they are plenty of such opportunities in Kerala? If it was set a couple of decades back, I could have understood this migration, but with malls coming up in every nook and corner in Kerala these days, the move makes little sense. Secondly, Kunchacko Boban-Jayasurya looking similar is a joke that has expired 15 years back. Both the actors have now created a separate and distinctive standing for themselves in the industry. I guess the Mallu in me is nitpicking here, but The Interview's attempt to sway towards Kerala culture felt very shallow, even with the smattering of the language here and there.

Finally, we come to Ishq Mastana, that is directed by Jaydeep Sarkar, who has also co-written the story along with Subhra Chatterji. After a bad breakup, Kabir (Skand Thakur) goes to meet Mehr (Tanya Maniktala) for a date. He sees the date as a hookup for him to get over the heartbreak, but she instead asks him to meet at a spot where she and her friends are holding an environment protection rally. As expected, it doesn't go well for him in terms of his intention, but by the end of the day, Kabir turns out to be a changed man.

The last episode kind of reflects the narrative technique of the first one (Save the Da(y)te), by having two contrasting individuals with differing viewpoints finding a common ground to bond. Kabir is egoistic and selfish, looking nothing other than wanting to bed with the girl, and not even caring for the cause she holds. Mehr cares for her activism, not because she wants to save the world but because she doesn't want the world to change her.

Great statement to make, and would have had left a bigger impact, if the rest of their debate didn't sound awkwardly structured. Just like the first episode. And no amount of Kabir's Sufi magic could save it from being better than average.

(The above story first appeared on LatestLY on Jul 23, 2021 07:09 PM IST. For more news and updates on politics, world, sports, entertainment and lifestyle, log on to our website latestly.com).