Netflix’s anthology series Feels Like Ishq revolves around six stories woven around the theme of love and how this one word can hold different meanings for different people. Read what the critics have to say about the TV series. 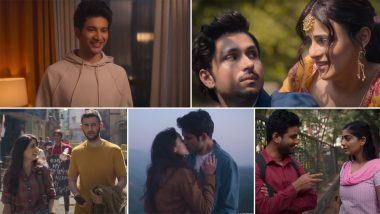 Feels Like Ishq is finally out on Netflix. The streaming giant has dropped the anthology series and is now available to watch online. For starters, this show comprises of six short films. Every mini-film shows the ups and downs in the central character's love lif. This Netflix original stars Rohit Saraf, Radhika Madan, Tanya Maniktala, Amol Parashar, Neeraj Madhav, and many more prominent faces. But is the TV series, worth a watch? Or it can be skipped? Well, the reviews of the show are out and they look mixed. Here, check it out.  Feels Like Ishq Trailer: Six Romantic Stories Rekindle Warm And Fuzzy Feeling Of First Love And We Love It (Watch Video).

NDTV: "All the six episodes of Feels Like Ishq tap the quaint and explore the unexpressed. They have something on offer by way of understated drama. The series has one creative director (Devrath Sagar), but each story is written and directed by a separate duo. So, every short film has a distinct flavour and inevitably differs from the others in terms of impact and accomplishment."

The Hindu: "The brief for the writers and filmmakers, it seems, was to come up with a “sweet love story” that would give the target audience — teens and 20-somethings — that quintessential “warm, fuzzy” feeling. Enough, Netflix, you probably need to take a break from anthologies. Oh, wait a minute... (realises Navarasa in Tamil is releasing in two weeks)." Feels Like Ishq, Anthology Series, To Drop On Netflix On July 23 (View Pics).

The Quint: "Perhaps the anthology’s greatest achievement is its casting— Radhika Madan, while a little cliched (think: Geet from Jab We Met) is convincing as a self-obsessed influencer, Mihir Ahuja plays the role of a star-struck teenager to perfection, and Sanjeeta Bhattacharya’s innocent exploration of her feelings make you root for her character the most."

Bollywood Life: "Feels Like Ishq is a perfect anthology for lovers of modern love stories. It has something for the traditional folks too. If you want to pass time, this might not be a bad option!"

Well, after reading the above reviews, we feel that Feels Like Ishq is not at all a bad watch. So, if you are looking to binge-watch some love-filled content this weekend, this TV series is for you. Stay tuned!

(The above story first appeared on LatestLY on Jul 23, 2021 01:41 PM IST. For more news and updates on politics, world, sports, entertainment and lifestyle, log on to our website latestly.com).