Filmfare Awards 2019: Here’s When and Where You Can Watch This Starry Event on the Television

The 64th edition of the Vimal Filmfare Awards was held at the Jio Garden in Mumbai. 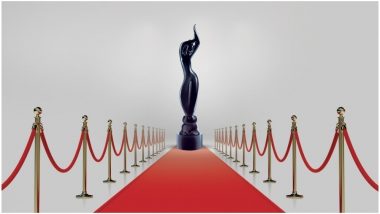 The 64th edition of the Vimal Filmfare Awards will air on Colors on April 20. (Photo Credits: Instagram)

The 64th edition of the Vimal Filmfare Awards, that took place last month with ‘Raazi’ being crowned the biggest winner, was held at the Jio Garden in Mumbai and the who's who from the film industry were gathered under one roof. Staying true to its reputation of being the most fashionable night of the year, the red carpet of Vimal Filmfare Awards saw some of the best looks of your favourite Bollywood celebrities. From pantsuits to sarees to sizzling gowns, there is nothing the red carpet did not witness. Present at the glitzy event were Alia Bhatt, Deepika Padukone, Sonam Kapoor, Sara Ali Khan, Janhvi Kapoor, Ranveer Singh, Ranbir Kapoor, Dia Mirza, Mouni Roy, among others. While we just can't wait for these to hit the screens already, Vimal Filmfare Awards 2019 is all set to be aired on television tonight. 64th Filmfare Awards Complete Winners List 2019: Ranbir Kapoor and Alia Bhatt Win Top Honors, Raazi Wins Best Film.

Yes, you read that right! The annual gala, which is organised to honour the talent in Indian cinema, will air on Colors on Saturday (April 20) at 9:00 pm. Excited much? Well, Colors, which also holds telecast rights for IIFA, Golden Petal Awards and Stardust Awards, have bought the television rights of Filmfare awards last year (2018). Sony Entertainment Television earlier had its telecast rights, which are now owned by Colors. Deepika Padukone on Losing Filmfare Award to Alia Bhatt: ‘I am Sorry as I Let My Fans Down’

Hosted by none other than the Baadshah of Bollywood, Shah Rukh Khan, the Filmfare 2019 was a star-studded night. Also, the new lot of talent like Vicky Kaushal, Janhvi Kapoor, Rajkummar Rao, among others were seen entertaining the audience with some of their engaging performances. The awards show had some big winners in Alia Bhatt and Ranveer Singh. Stay tuned to this space for all updates on the awards show.

(The above story first appeared on LatestLY on Apr 18, 2019 07:01 PM IST. For more news and updates on politics, world, sports, entertainment and lifestyle, log on to our website latestly.com).