Friends The Reunion: 5 Shows That Need a Reunion Special After Friends (LatestLY Exclusive)

With Friends: The Reunion coming out, we are taking a look at some of the sitcoms that should get a reunion special too. Check it out. 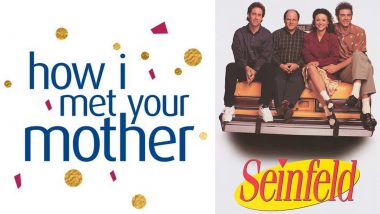 How I Met Your Mother, Sienfield (Photo Credits: Instagram)

Friends is finally getting a reunion special this week, and the fans couldn’t be happier about it. After years of asking for a reunion, they are finally getting it. This unscripted special sees the entire main cast return where they visit some of the original sets of the show, have interviews with the guest celebrities, and do table reads and reenactments of the older episodes. FRIENDS the Reunion Review: Nostalgic, Heartbreaking, Touching and Somewhat Stretched, ‘The One Where It All Comes Back’! (LatestLY Exclusive).

With Friends: The Reunion coming out, we are taking a look at some of the sitcoms that should get a reunion special as well after Friends.

How I Met Your Mother

Perhaps the one show aside from Friends that fans want to see a reunion most for is How I Met Your Mother. The sitcom follows Ted Mosby and his group of friends in Manhattan. As a framing device, Ted, in the year 2030 recounts to his children the events that led him to meet their mother. It’s been seven years since the show ended and ever since then, fans have been asking for a reunion.

This political satire mockumentary sitcom follows Leslie Knope, a perky, mid-level bureaucrat in the Parks Department of Pawnee, a fictional town in Indiana. The show features an ensemble cast and has a great sense of blending reality with comedy, which made the show so memorable. It’s been six years since the show ended and it would be great to see a reunion special for Parks and Recreation due to how far the actors have come into their careers.

This mockumentary sitcom depicts the everyday work lives of office employees in the Scranton, Pennsylvania, branch of the fictional Dunder Mifflin Paper Company. The show over the years has garnered a huge fan following that has been asking for a reunion for the last few years. Seeing as the show ended back in 2013, it would be great to see a reunion special for it.

Malcolm in the Middle

The series follows a dysfunctional working-class family and stars Frankie Muniz in the lead role as Malcolm, an adolescent who tests at a genius level. This coming of comedy has become a cult classic over the years with many of the fans asking for a reunion of the show. It would be interesting where and what have the kids been up to all this time. Friends: From Brooklyn Nine-Nine to The Big Bang Theory, 5 More Shows To Watch if You Are a Fan of the Sitcom (LatestLY Exclusive).

Perhaps one of the most iconic sitcoms of all time, Seinfeld follows a fictionalized version of Seinfeld himself and focuses on his personal life with three of his friends. While the show did have some sort of reunion back in 2009 on the show Curb Your Enthusiasm, it still hasn’t received a proper reunion of its own and with Jerry Seinfeld saying that a reunion might never happen, it would still be great to see all the actors return once again for the last time.

(The above story first appeared on LatestLY on May 27, 2021 09:01 PM IST. For more news and updates on politics, world, sports, entertainment and lifestyle, log on to our website latestly.com).

Comments
Tags:
Friends Friends Reunion How I Met Your Mother LatestLY Exclusive Malcolm in the Middle Parks and Recreation Seinfield The Office
Comments
You might also like