FRIENDS the Reunion Review: Nostalgic, Heartbreaking, Touching and Somewhat Stretched, ‘The One Where It All Comes Back’! (LatestLY Exclusive) 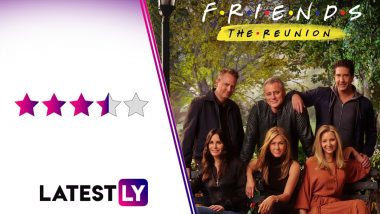 Friends The Reunion Review: I will begin this review with an admission. This review will be, indubitably, biased. Although a late bloomer to the FRIENDS fandom - I started bingeing the show seven years after the sitcom ended in 2004 - I was, and am, a diehard fan of the show, yes, even with all its prevalent flaws. I still watch some of my fave episodes during lunch breaks and when I am on a low. So while I know that the Friends The Reunion is just to cash in on mine, and millions of the show's ardent fans' adoration, I let it pass. In these times of gloom and uncertainties, maybe nostalgia is that opiate dose we need, and FRIENDS The Reunion special has that. In Plenty! Friends: From Brooklyn Nine-Nine to The Big Bang Theory, 5 More Shows To Watch if You Are a Fan of the Sitcom.

So being a die-hard fan, I believe I belong to the creed that can evaluate the reunion special better than its cynical watchers. When I say 'die-hard', I don't mean blind bhakt by the way. FRIENDS The Reunion might have left me teary-eyed in quite a few places, but it also made me ask, 'OK, why the f**k was that there?' or 'Why him or her? Why not that guy or girl from that episode we loved?' But more on the flaws later. Let's talk about the good stuff.

Of course, it is quite a magical feeling to see David Schwimmer (who enters the set first), Lisa Kudrow, Jennifer Aniston, Matt Le Blanc, Courtney Cox and Matthew Perry (As Jennifer puts in 'Could you be any later?') come together under one roof of the same sets that they once worked 17 years back. I know that the scene of Matthew and Matt sitting on their cushion chairs was purely fan-service, but I was here for such moments.

I loved it when they replayed that famous 'quiz show' from one of the series' best episodes 'The One With The Embryos', this time letting the girls win. I cheered when Mr Heckles (Larry Hankin) walked in, the first FRIENDS supporting player to arrive on the special.

Although I had already seen the many bloopers they played during the episode, I loved to join the 'Friends' as they watched those outtakes together on that iconic television set. Or when they did the table-readings of some of the popular scenes. Have to say that it was Lisa Kudrow who stole that sequence there with a perfect recreation of 'Monica and Chandler! MONICA AND CHANDLER! My eyes... MY EYES!' But then, why I am not surprised about it?

And before I forget, there is also a recreated FRIENDS opening credit sequence, mixing old and new footage, that I believe is now going viral!

My most favourite segment that didn't involve callbacks was when the episode showed the global impact that FRIENDS owned. Taking bytes from fans across the world - from Chile to India - the segment shows how FRIENDS play an influential part in the lives of these viewers. The segment is so nice that I didn't mind the cameos of K-pop boy band BTS and Nobel laureate Malala Yousafzai in there - they blended perfectly with the rest of the fans. Same, however, cannot be said about the rest of the cameos. More on that later, I promise.

FRIENDS The Reunion also serves heartbreaks in plenty, especially the closing moments that also mirror the sitcom's closing moments. Fantastic instrumental score there that goes all out to tug your tear-glands.

However, the most heartbreak the episode gave me was Matthew Perry. Chandler Bing is the reason why I was addicted to FRIENDS in the first place, his sarcastic style of humour, that hides his insecurities and fears, was something I could totally relate to then. Matthew Perry had the most troubled life among most of the cast-mates with his addiction issues. During the reunion special, while he did crack occasionally, Perry was the most subdued of the lot. When Aniston was raving about how the cast-mates were always in touch with each other, Perry replied nonchalantly that no one ever called him. Later in the episode, he spoke about how, during the sitcom run, he had this anxiety disorder that his jokes might never land, and Lisa Kudrow's surprised reaction at being ignorant about this is very relatable. How often do we believe we know a person too well only for that person to show us a side he or she or they hid from us for long? Amul Pays an Awesome Tribute to 'Friends', Hours Before the Release of Its Reunion Special Episode in India.

The episode also dropped some interesting tidbits like when Matt (most jovial of all, though the paunch reminded us that we have also aged with him) told how Courtney used to write her lines on the dining table and he used to erase them. Or when David shared his displeasure working with Marcel the monkey, ending his tirade with an F-bomb. Or when Jennifer and David revealed they were majorly crushing on each other, that the rest of the cast-mates told they knew it even back then, much to David' surprise.

However, not all revelations were new. When the focus fell on the show's producers (and creators) - Kevin S Bright, David Crane and Marta Kauffman  - they talked about stuff most of us already know by now. Just open the show's Wikipedia page and you can learn all about how the actors were cast and all. The only interesting bit I learnt was that Matt le Blanc's close competitor for the role was the actor who played his 'twin' in the episode 'The One with Unagi'.

Also a little confusing was when the stars discussed the celeb cameos on their sitcoms and they talked about Danny Devito, Julia Roberts, Sean Penn and all. Aniston had no qualms talking about her ex, Brad Pitt, who appeared in that memorable Thanksgiving episode 'The One with the Rumor'. But smh they missed out talking about Bruce Willis (who even won an Emmy for his three-episode arc). Could it be that Ross is still afraid of Paul Stevens?

Still these were harmless trivialities that could be ignored. The more annoying aspects of FRIENDS The Reunion came when it was not err... non-FRIENDS-y. The whole James Corden-host chat show segment was just about okay, including the fashion segment, where Cindy Crawford, Cara Delevingne and Justin Bieber did a ramp walk in some of the show's iconic costumes.

The most disappointment comes from how the reunion handled the cameos. The non-FRIENDS cameos from the likes of David Beckham, Kit Harington, Mindy Kaling among others make you wonder why we need them to reiterate why we adore the show so much. Even more irksome is how the special treats the FRIENDS cameos, most of them just about there and leaving very little impact to the episode, especially Elliot Gould (Jack Geller) who just has one word to say, or Tom Selleck (Richard) just trespassing on the quiz show and not even talking about his famous character. And why o why, were some of the other popular FRIENDS alumni not called? The likes of Jessica Hecht, Cole Sprouse, Jane Sibbett, Hank Azaria, Helen Baxendale, Paul Rudd et al. I understand that Paul Rudd is the biggest star of them all, and might not be affordable after paying out $3.5 million to each of the main FRIENDS cast to appear for the special. But he could have livened up the proceedings better than Lady Gaga looking clearly out-of-place crooning "Smelly Cat".

Also, if you expect FRIENDS The Reunion to address some of its criticisms like the lack of colour representation, the homophobic jokes, fat-shaming etc, you are clearly in the wrong place. The most controversial question ever put across the actors was 'Was Ross and Rachel on a break?'. Surprisingly, all answered affirmatively (Matt, albeit, hesitatingly).

Still, despite all the shortcomings, FRIENDS The Reunion has been well-directed (Ben Winston has done a fair job), as it smoothly intersects from one segment to another and back. And yes, the nostalgia does work!

PS: BTW, Jennifer, sorry to correct you but the first kiss between Ross and Rachel didn't happen at Central Perk in season 2, but at a laundromat in season 1 episode 5 "The One with the East German Laundry Detergent" Ah, the problem of being addicted to FRIENDS reruns! But then most of the FRIENDS stars, themselves, do not remember much about the show.

- When FRIENDS do FRIENDS things

- How It Deals With Cameos and Doesn't Go Beyond Fan-Servicing

Is FRIENDS The Reunion the best-done reunion for a series ever? No, I would, hands down, credit that to how Curb Your Enthusiasm did an Seinfeld reunion! That said, FRIENDS The Reunion does a great job of playing up your nostalgia and showing why you cared for them to be together in those sets again 17 years later. A nice dose of positivity needed in a time perfectly summed up by FRIENDS' opening song 'Your job's a joke, you're broke. Your love life's DOA. It's like you're always stuck in second gear. When it hasn't been your day, your week, your month. Or even your year!" FRIENDS has been there for us! FRIENDS The Reunion is streaming on Zee5 (In India) and HBO Max.

(The above story first appeared on LatestLY on May 27, 2021 04:09 PM IST. For more news and updates on politics, world, sports, entertainment and lifestyle, log on to our website latestly.com).