Friends: From Brooklyn Nine-Nine to The Big Bang Theory, 5 More Shows To Watch if You Are a Fan of the Sitcom (LatestLY Exclusive)

Friends: The Reunion will stream on HBO Max in USA, and on Zee5 in India. So here we are taking a look at five shows that you should watch if you liked Friends. 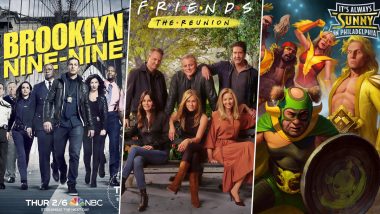 Friends is finally making a return on May 27, 2021 with a reunion special. This unscripted episode sees the main cast visit the sets of the original show, meet the guests who appeared on the show and do table reads and re-enactments of older Friends episodes. This is a real treat for the fans of the show as everyone has been asking for a reunion for such a long time. Friends: The Reunion will stream on HBO Max in USA, and on Zee5 in India. Friends Reunion: Date, Time, Where and How You Can Watch the Sitcom Special on HBO Max and ZEE5!

So to celebrate the release of Friends: The Reunion we are looking at five shows that you should watch if you liked Friends.

Streaming in India on: Netflix

This police procedural sitcom revolves around Jake Peralta, a NYPD detective in Brooklyn’s fictional 99th Precinct and his team, which included his serious, stern and gay commanding officer, Captain Raymond Holt. The series is surprisingly sweet when it showcases the relationship between people among the precinct and plays off the humour based on their friendship. Final Season of 'Brooklyn Nine-Nine' to Premiere in August.

How I Met Your Mother

This sitcom follows Ted Mosby and his group of friends in New York City’s Manhattan, as they navigate through love lives and career dilemmas. As a framing device, Ted, in the year 2030 recounts to his two kids the events that led him to meet their mother. The show is quite similar in structure to Friends and is simultaneously as iconic as Friends as well. A sequel series, How I Met Your Father, is in the works now. Hilary Duff To Star in ‘How I Met Your Mother’ Sequel Series.

Streaming in India on: Netflix

This sitcom originally followed a group of five friends which was then expanded to seven in the later seasons. The humour was mostly around the social awkwardness of its male protagonists, who are scientists and an engineer, while gags are around nerd culture and scientific equations. A spinoff, Young Sheldon, based on the growing years of Sheldon Cooper is streaming on Amazon Prime Video. The Big Bang Theory Finale Review: 10 Moments of Sheldon Cooper and Gang That Gave the Popular Sitcom Such a Lovely Conclusion!

Created by Rob McElhenney, who developed it alongside Glenn Howerton, the sitcom follows the exploits of a group of narcissistic friends who run the Irish bar Paddy’s Pub in South Philadelphia. The show is a complete opposite of Friends, as Friends was based on the more comforting sides of friendship, while It's Always Sunny in Philadelphia is more on the destructive side of it. Even the humour is edgier, as the show tackles racism, gender norms, gun violence in a no-holds-barred take. Rob McElhenney Birthday Special: 11 Quotes of the Actor From It's Always Sunny in Philadelphia That are Funny, Cheeky and Will Make You Laugh Out Loud.

Malcolm in the Middle

The series follows a dysfunctional working class family and stars Frankie Muniz in the lead role as Malcolm, an adolescent whose IQ tests at a genius level. The show is a coming of age comedy and has remained a cult classic over the years, with many praising it as one of the best sitcoms ever. That the great Bryan Cranston plays Frankie's scene-stealing father is just an attractive bonus.

(The above story first appeared on LatestLY on May 26, 2021 06:26 PM IST. For more news and updates on politics, world, sports, entertainment and lifestyle, log on to our website latestly.com).

Comments
Tags:
Brooklyn Nine-Nine disney Disney+ Hotstar Friends Friends Reunion Friends The Reunion Hotstar How I Met Your Mother It's Always Sunny in Philadelphia Malcolm in the Middle Netflix The Big Bang Theory
Comments
You might also like