Ma Rainey’s Black Bottom, directed by George C Wolfe, would be releasing in select theatres in November and on Netflix on December 18, 2020. 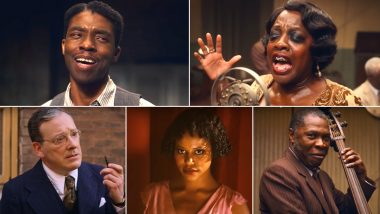 Blank Panther star Chadwick Boseman breathed his last on August 28, 2020, due to complications related to colon cancer. The legendary actor had never spoken publicly about his cancer diagnosis and his sudden demise came as a huge shock to his fans across the globe. The late actor would be seen one last time in a Netflix film, Ma Rainey’s Black Bottom, helmed by George C Wolfe. This is Chadwick Boseman’s last movie and it is releasing ahead of Christmas 2020. Ma Rainey’s Black Bottom: Netflix Unveils Release First Look Images of Chadwick Boseman’s Last Film.

The makers have released the trailer of Ma Rainey’s Black Bottom starring Viola Davis in the titular role as Ma Rainey. She is a trailblazing performer, the legendary ‘Mother of the Blues’. It features Chadwick Boseman as an ambitious trumpeter, who is aspired to make his own mark in the music industry. This upcoming Netflix film is based on Pulitzer prize winner August Wilson’s play. The story revolves around singer Ma Rainey, during the time she makes a record in a studio in Chicago in 1927, where tensions boil between her, her white agent, producer and her bandmates. This film will also the exploitation of black recording artistes at the hands of white producers. The Devil All The Time Movie: Review, Plot, Cast, Trailer, Everything You Need to Know About Tom Holland, Robert Pattinson’s Netflix Film.

(The above story first appeared on LatestLY on Oct 20, 2020 09:07 AM IST. For more news and updates on politics, world, sports, entertainment and lifestyle, log on to our website latestly.com).